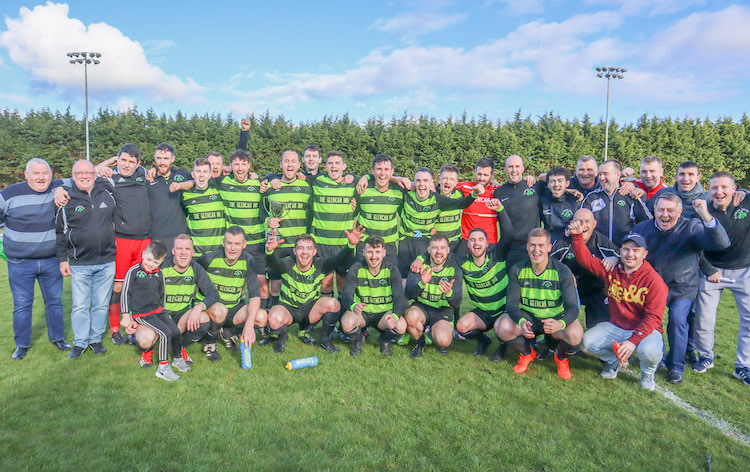 Glencar Celtic come from behind to win Voodoo Venue Cup

written by Staff Writer May 11, 2019
FacebookTweetLinkedInPrint

Glencar Celtic Manager Eamon Dunne enjoyed Cup final success in his first final as his side came from a goal down to defeat Strand Rovers.

By Stuart Connolly at the Diamond Park

Conor Greene gave the League Champions an early lead before Paddy Collins headed in the equaliser.

Liam Doherty powered home a header of his own as Glencar lead at the break with Graham Cullen netting the third after the restart to seal the win.

The sun was gloriously shining on Diamond Park in Ballyare as the spectators witnessed a bright start to the Voodoo Venue Cup Final. League Challengers Glencar Celtic started the better side, earning some early corners but with no success as League Champions Strand Rovers took the lead on eight minutes.

After failing to clear a corner the ball was curled back in from the right side, it fell to Conor Greene who fired at goal, Dom Friel got something on the ball but not enough to keep his team from going a goal down.

That lead lasted all of seven minutes as Glencar drew level, although shot stopper Kevin McGovern may feel he could have done more to stop the equaliser.

Long throw-ins these days can be as good as corners and after a knocked on header, Paddy Collins hit a looping header towards goal, it seemed to take an age before going in with McGovern scrambling.

Garvan Grieve was on set piece duty for Glencar but had a pop at goal himself from distance shy of the half hour, it had McGovern worried and backtracking but he caught well to keep the score level.

Shortly after Strand came close to regaining their lead, James McCole whipped a ball in from the right side, and Greene met it well at the back post but saw his header meet the side netting.

Moments later, Glencar took the lead, going into the interval 2-1 up.

Following a bad corner, Grieve got a second chance at a delivery, with Liam Doherty meeting the cross on the left side of goal, heading into the far corner.

The second half didn’t see as much action as the first as the sun continued to shine.

On 50 minutes, Glencar doubled their lead.

Collins providing an assist, weaving his way into the box on the right side, he passed to Graham Cullen who was unmarked, allowing him to convert from close range.

Strand nearly halved the deficit instantly, from kick off, Brendan Glackin found himself rounding keeper Friel but was closed down before getting the chance to tap into an empty net.

Two or three goal leads seem to be dangerous nowadays, but there was to be no repeat of the Champions League drama as Glencar held onto their lead to lift the Voodoo Venue Cup.