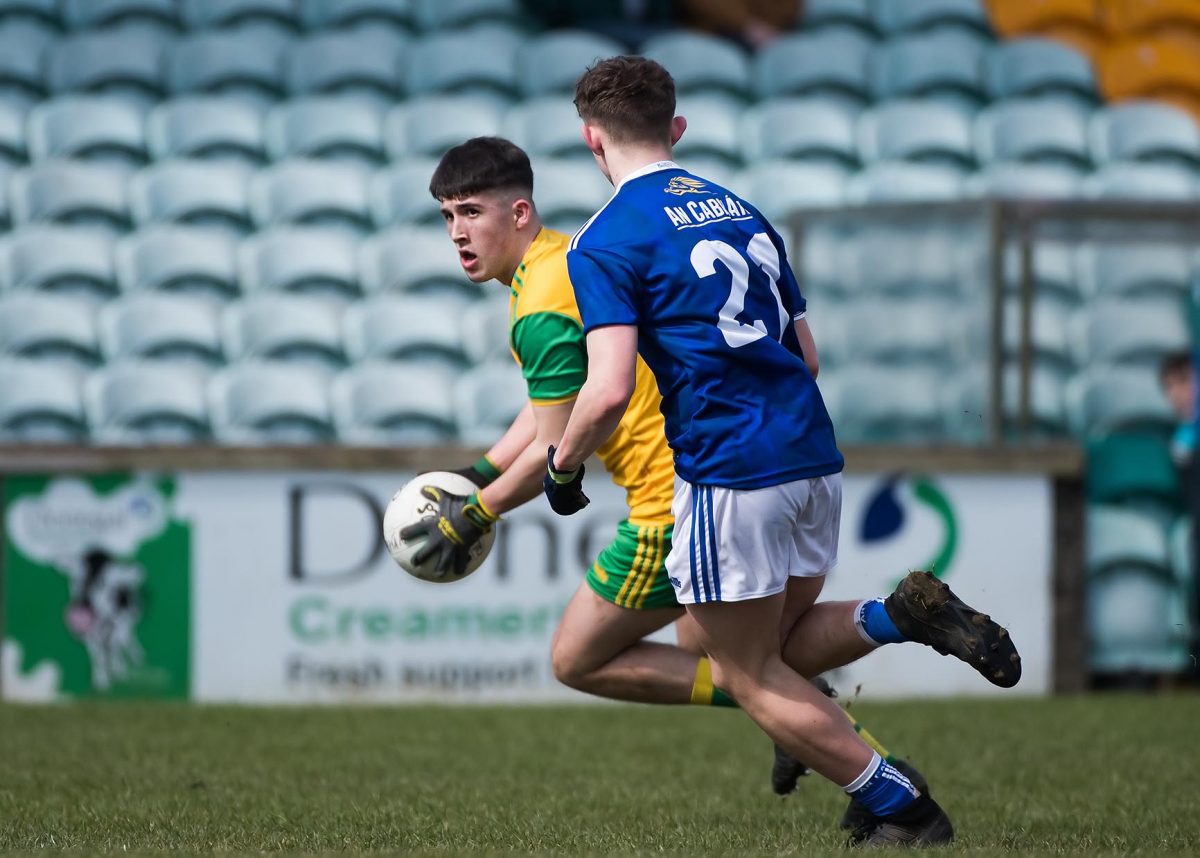 written by Chris McNulty May 11, 2019
Facebook0Tweet0LinkedIn0Print0

Shane Monaghan came off the bench to hit two goals as Donegal’s minors overcame Armagh in an Ulster MFC round two qualifier.

Monaghan – a nephew of former Donegal star Brendan Devenney – netted twice after being sent on as a 49th minute replacement for Eric Carr.

Donegal were in danger until they were bailed out by Monaghan’s (pictured by Evan Logan) opening goal, only seconds after he came into the action.

Johnny McGroddy, who kicked nine points for Donegal, picked up on a loose pass and unselfishly passed for Monaghan to palm home.

Armagh were hanging on to the Tir Chonaill coat tails when Monaghan took a ball in from Eoin Martin and hammered home off the crossbar.

The Orchard finished with 12 players. Armagh defender Lee Rice was sent off on 51 minutes for his part in an off-the-ball incident with Jamie Grant, while O’Callaghan and McKeever also made the long walk in added time.

Mark McKeever’s goal in the first half helped turn the tide in Armagh’s favour and Donegal were rocked when Rory Kearney smashed home two minutes into the second half.

Caolan Reavey got between two Donegal defenders to win a ball in from Dan McCarthy. Reavey off-loaded for Kearney, who fired high into the Donegal net.

Donegal looked to be on their way to opening up a comfortable advantage when goalkeeper Daithi Roberts stepped up to convert a 20th minute free.

Roberts’ free put Donegal 0-7 to 0-3 in front, but Armagh pounced to score 1-3 in a lethal six-minute spell to stun their hosts.

Mark McKeever stole in behind the Donegal rear-guard to get on the end of Redmond French’s ball in and fire past Roberts, who remained on his goal-line. McKeever’s goal took Armagh within striking distance and the Orchard tails were up.

Dara O’Callaghan evened things up with a free before Caolan Reavey and Oisin King landed points to put Armagh in front.

Donegal might have got in for a goal from the throw-up, with the clock showing 15 seconds when midfielder Eoin Dowling burst through, but his shot was off target.

Johnny McGroddy – who hit seven points in the recent defeat to Tyrone – fired over twice, either side of a tidy attempt by Carlos O’Reilly.

Senan Rooney and a McGroddy free opened up a three-point lead for Donegal, who kicked on when Eric Carr knocked over a fine point from the left-hand side.

Carr and the fit-again Eoin De Burca were drafted into the Donegal XV from the team that had lost to Tyrone a fortnight ago.

Then, Paul O’Hare’s goal had ignited a comeback from Donegal only for Tyrone to strike late.

O’Hare came off the bench to bring Donegal back into it, with Armagh holding the aces in the form of a 1-6 to 0-8 interval lead.

Armagh revived after a 1-5 to 0-4 loss against Derry to overcome Antrim last weekend in a qualifier at the Athletic Grounds and they got a huge shot in the arm when Kearney rattled the River End net in the 32nd minute.

A McGroddy point had Donegal level after only 13 seconds of the new half, but Kearney’s goal was a hammer blow to the Tir Chonaill outfit.

A McKeever free widened the margin again, but Donegal hit back, spurred by a double from the deadly McGroddy.

O’Callaghan and sub James Walsh – with his first touch – kept Armagh’s noses in front with Donegal knocking on the door through McGroddy and O’Reilly.

They finally got over the threshold when Monaghan struck gold to keep their 2019 hopes alive.