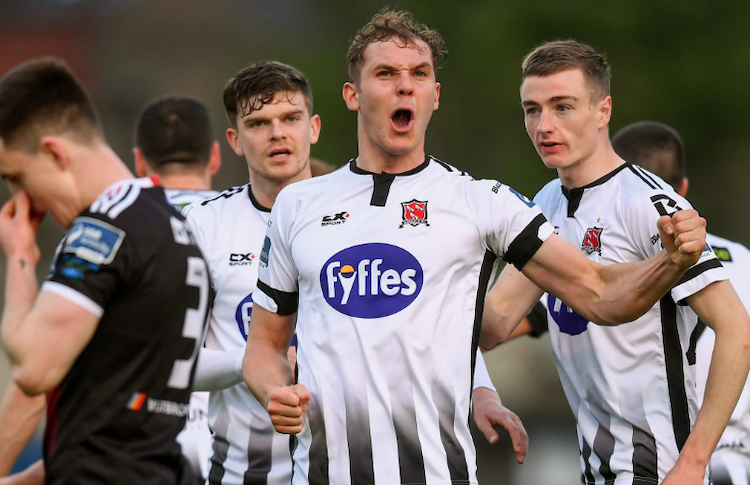 written by Chris McNulty May 12, 2019
Facebook0Tweet0LinkedIn0Print0

Kelly, making his first League start in place of the suspended Pat Hoban, netted Dundalk’s first goal in a 2-0 win at Bohemians.

Kelly’s goal, in front of the traveling hundreds from Dundalk in the Des Kelly Stand at Dalymount Park, set the Lilywhites on their way to a win that puts them top of the table.

“It was a big chance for me – a big crowd, one of the biggest games of my life – so to get the goal was a great relief,” Kelly said.

“I’ve had to be patient, with Pat playing so well. These chances don’t come along that often, so building up to the game I knew that getting this chance, I had to make an impact. Thank God I got the goal. Hopefully it kicked us on to get the win.”

Kelly fired home in the 22nd minute, spinning round to fire home the opening goal.

The Tooban man’s mind is a haze as to how it panned out, but he said: “In front of the Dundalk supporters too, it was a special moment for me. I can’t even remember how I celebrated. It’s all a bit of a blur, but it was a great feeling.”

Dundalk, the defending champions, are away to Cork City next week, but are on a serious run that has seen them overhaul a 13-point defecit.

Kelly said: “To cut that margin down so quickly and go on the run of form we’ve went on has been incredible.

“Hopefully now we can build on it again next week and create a gap between us and Rovers. We won’t be looking at the table though and thinking ‘we’re top of the league’. We’ll just want to kick on and keep winning games.”