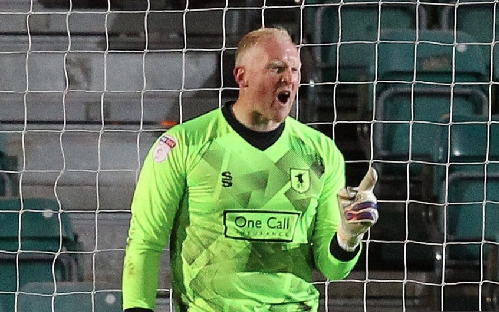 written by Chris McNulty May 12, 2019
FacebookTweetLinkedInPrint

Logan’s Mansfield Town lost 5-3 on penalties to Newport County, who are off to Wembley for the play-off final.

Penalties were needed after a 0-0 draw at Field Mill.

In Thursday’s first leg at Rodney Parade, Logan made a string of saves to keep Newport out.

Logan made one save in the first leg, from Jamille Matt, that was likened to a famous stop from Gordon Banks to deny Pele.

This evening, Logan, with Mansfield on home soil, repeated his heroics with super saves from Josh Sheehan and Mark O’Brien.

Logan thwarted Sheehan a second time when he remarkably kept out his stinging volley.

The key moment of the shoot-out saw Mansfield goalkeeper Joe Day save from Tyler Walker.

Dan Butler, Pádraig Amond, Mickey Demetriou, Regan Poole and Matt Dolan all found the net with Logan so close to saving from fellow Irishman Amond – who he denied from the spot in the opening leg.