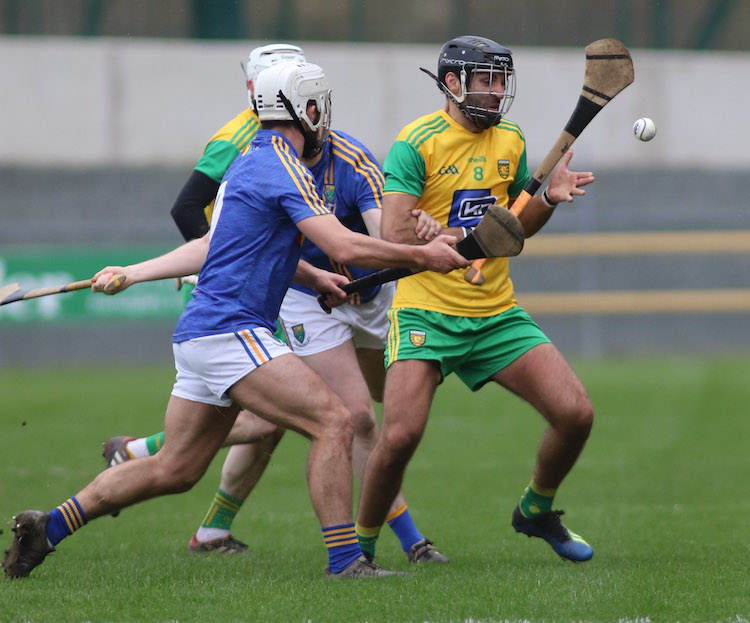 written by Chris McNulty May 12, 2019
FacebookTweetLinkedInPrint

Hughes’ treble and another goal in added time by Jonathan O’Neill saw Wicklow get the edge over a spirited and understrength Donegal.

Donegal, spurred by the on-song Lee Henderson, led 1-6 to 0-2 after 27 minutes, but Hughes’ opening goal brought Wicklow firmly back and they were just 1-7 to 1-5 in arrears at the short whistle.

Hughes wheeled away from the Donegal defence in the fifth minute of the second half to riffle home his second goal and, just a minute later, Hughes got under another long ball and found the bottom corner for his hat-trick.

Henderson was forced off injured in the second half, but the Donegal fight was carried by Ciaran Matthewson, who inched the hosts closer.

Donegal were just two behind as the clock turned red, but any hopes of a late siege were dashed when O’Neill slotted home after a Moorehouse shot came off an upright.

Donegal got off to a dream start with a goal after just five minutes. Danny Cullen’s free from deep in his own half broke short and Henderson seized on the chance. The Sean MacCumhaills man weaved through to fire past Conor McNally.

Henderson’s goal will make him the answer to quiz questions in the future about Donegal’s first-ever score in the Christy Ring Cup.

Henderson tacked on a free to put Donegal four to the good.

Mickey McCann was without top scorer Declan Coulter, who missed out through a troublesome ankle injury. The absence of Coulter, Donegal’s ace marksman in the League,  was a body blow.

Wicklow were semi-finalists in the Christy Ring last year, losing out to London after coming second in their group, but the Garden County arrived in Letterkenny without Andy O’Brien, whose scores helped them to win promotion into Division 2A this spring.

Donegal’s endeavour in the first half was best shown by a brave block from full-back Christopher McDermott, whose hand bore the brunt of the strike he moved in to halt.

Three frees from Henderson – one of which he deliciously popped over from the touchline on the ’45 – and a classy point from play after a brilliant run down the left by Jack O’Loughlin, had Donegal 1-5 to 0-1 ahead.

Against the run of play, Wicklow stormed back for a goal as Hughes finished past Burns from Eoin McCormack’s pass.

Donegal led 1-7 to 1-5 at half-time, but might have had a second goal, only for Dillon Duffy’s effort to fly just over the black spot when he spun dangerously on the ’13.

Disaster struck for Donegal as Wicklow hit 2-3 in the opening eight minutes of the second half to take charge of things.