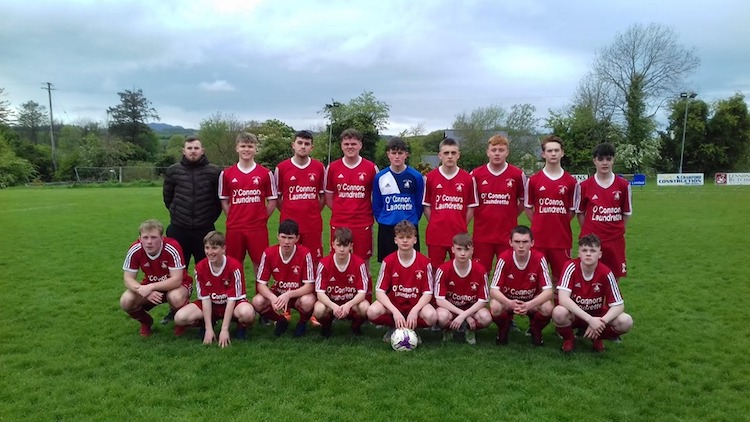 Swilly Rovers and Letterkenny Rovers remain joint top of the Donegal Youth League, while Keadue Rovers won 1-0 for the fourth successive game – here’s a full roundup of this evening’s action.

Swilly started the better and Eoin Logue has a decent 20 yard shot well saved on three minutes by Corey Byrne in the Eany goal.

Steve McDaid of Swilly had a 15-yard shot well saved by Byrne on 26 minutes.

Swilly’s Evan Hewitts curled effort from 16 yards put just over on 41 minutes as Swilly desperately sought an opener before the break.

They came close again Oisin Coyle’s cross was met with a fine volley from Lee McPaul which was superbly saved by Byrne, who put in a fine performance in goal in the first half.

Evan Hewitt set up Matthew McLaughlin on 43 minutes and had his fine shot cannoned off the crossbar as Swilly ended the half well on top.

Swilly went ahead on 54 minutes when Evan Hewitt was brought down in the box. Referee Vincent McLoughlin had no hesitation in pointing to the spot and Matthew McLaughlin converted with confidence firing hard past Byrne.

Patrick McFadden in the Swilly goal produced a super save on 70 minutes from Eany’s Mark Hutchinson which was the nearest John Daly’s side came to an equaliser as Swilly remain joint top with Letterkenny Rovers in the league.

Letterkenny Rovers continued their winning ways in this season’s Donegal Youth League with a big win over Gweedore United in a strange game at a sun-kissed Leckview Park.

Rovers have been slow starters in their games to date and it was the visitors who were in the ascendancy for the opening quarter of this clash.

They should have gone in front on five minutes when the Rovers defence were caught napping which allowed Kyle Doohan time and space but his effort was well closed down by home netminder Johnathan Pearson before Shaun McFadden fired high over the crossbar.

Gweedore were playing the better football at this stage and took the game to their hosts with the lively Nathan O’Brien and Micheal Doherty combining well and they limited the home side to just one chance in that period when Conor Friel should have done better but he shot straight at goalkeeper Peadar O’Baoill.

It was Rovers though who got the all-important opener on 25 minutes when Friel atoned for his earlier missed effort. He latched onto a Joel Gorman through ball and made no mistake when firing past O’Baoill low to the corner.

Gweedore had barely reorganised when Rovers doubled their lead just 90 seconds later when a Gorman corner was headed back by Jack Dwyer and Dylan Doogan reacted like a fox in the box to fire home.

Rovers extended their lead when the unfortunate Sean Doherty scored an own goal before Doogan made it 4-0 just before  the break when again firing home after the initial groundwork was done by Thomas Keys and Gorman.

The home side were quick out of the blocks in the second half and it was Leon Doherty who scored from close range on 47 minutes.

Doogan completed his hat-trick when making it 6-0 on 58 minutes when Nathan Plumb did well to reach the by-line before squaring for Doogan to net from close range.

Gweedore got one back when Eamonn Gallagher  latched onto a defensive mistake to fire home on 80 minutes before Rovers extended their advantage with Friel completing his treble on 85.

Fanad scored after 13 minutes through Calvin Murray before Gavin McDaid levelled just minutes later in what was a frenetic start at St Patricks Park.

Drumkeen went ahead when Bashar slotted home the rebound after Jason McDaid failed to convert from the penalty spot.

Daire Shiels then equalised for Fanad as it was 2-2 at the break.

McDaid then headed Drumkeen ahead on 57 minutes  from Jason McDaids cross before Drumkeen were awarded another penalty which Gavin McDaid took this time and cooly slotted home to complete his hat-trick and hand Jaydee Alawiye’s side a timely boost having been on the end of 4 narrow defeats.

Keadue Rovers won 1-0 for the third successive game as an Orrin Burgess wonder free kick settled the game on 84 minutes.

Keadue have won four from four in what has been a super start to the season for Pat McGee’s men and he will once again have Burgess to thank after he also hit the winning goals in the previous 1-0 wins.

Donegal Youth League – Here’s a full roundup from this evening’s games was last modified: May 15th, 2019 by Chris McNulty