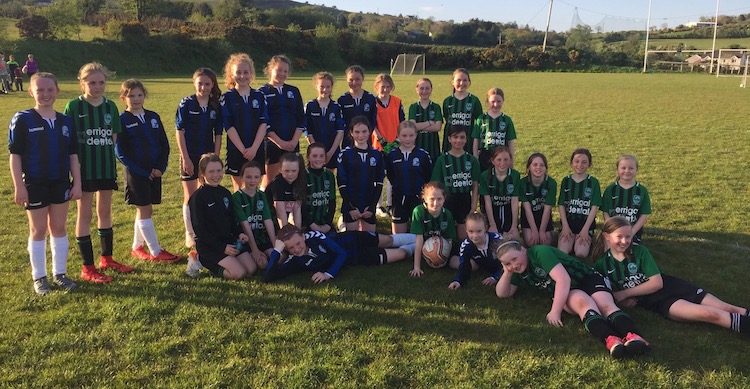 It was another busy period of action in the Donegal Women’s League and all levels are showing a very high standard with big crowds attending games, which are coming thick and fast.

It was end-to-end stuff on a warm night in Bonagee as the two teams gave their all.

Bonagee broke the deadlock when Hannah Hopkins latched onto a superb through ball and riffled home.

However, Finn Valley drew level almost immediately when Ciara Lawne brilliantly shot past Emma Doherty in the Bonagee goal from distance. Lawne’s wonderful effort from outside the box flew to the roof of the Bonagee net.

Hopkins broke through again, but was out-muscled by the Valley rear-guard just as she was about to pull the trigger.

Sienna Doherty came so close to putting Bonagee ahead again, firing just over the top after brilliant work by the home team.

Lawne could have put Valley in the lead again, but the visitors found Doherty in fine form in the home goal.

Chloe Creevy was introduced to the Bonagee side at half-time and proved a real livewire in the second half.

With Amy Callaghan battling brilliantly in the engine room, Bonagee kept the pressure on while Ava Doherty had a superb game in defence for the home side and made sure the hard-working Valley didn’t get through.

Gaby O’Donnell was on the double as Lagan Harps defeated Raphoe Town on Tuesday night.

O’Donnell’s brace and another by Lucy Canning looked to have Lagan home and hosed as they led 3-1.

Ella McHugh netted the first Raphoe goal and it was McHugh who was on target to tee up a grandstand finale to proceedings.

A gallant Raphoe sought the leveller, but Rebecca McColgan hit the underside of the bar and Lagan prevailed.

There was nothing between Finn Valley and Illistrin FC in a hard-fought contest.

Both sides had their moments, but it was an evening when defences were on top from start to finish.

Both goalkeepers, when called upon, did their duties and ensured that a scoreless draw – certainly a rarity in the Donegal Women’s League – was played out.

The two teams gave their all and it was a fair reflection on the match.

Many people would have sat watching Man City or Liverpool over the weekend the exciting end to the Premiership, but if any game deserved a big crowd to be watching it was this tightly fought contest.

It was a game that could’ve gone in any direction.

Both teams can be proud of their displays during the game. Lagan were first to attack on the fourth minute with Orlaith Doherty sent clear by Sine Harris Ryan on a one to one with Mary Bridget McGeever, who pulled off a great save with Clodagh Gibbons clearing the loose ball.

Unfortunately, this was last action for Orlaith as she twisted her ankle.

Shortly afterwards Katie Shovelin scored the first goal of the match when she seized her opportunity to put the ball in the net after good team play from Laragh Blaney to put Mulroy one up.

On 18 minutes, Aisling Mugan was put through by Niamh Ryan but she took her shot too early and was easy save for Mary Bridget.

Amy Doherty pulled off a great save from Meabh Sweeney with Lagan defense of Kelsey Gallagher, Scarlet Keys and Sorcha Keys able to withstand the Mulroy pressure.

Mary Bridget pulled off some great saves from Ellie McNeill and Niamh Ryan with Mulroy holding their one goal lead going into the break.

On 42 minutes Lagan equalised with Aisling Mugan passing out right for Niamh Ryan to score. Lagan went ahead on 45 minutes when Sorcha Keys volley home a corner from Aisling Mugan at the back post.

The visitors started off the better of both teams and had Bonagee on the backfoot from the start.

It took a while for the home side to settle in but it was against the run of play that Bonagee went in front. A through ball from midfield put Laura Callaghan in and she calmly slotted it past the Milford ‘keeper.

Both teams battled hard in the heat and after a water break midway through the first half Milford deservedly got back on level terms when a defensive error by Bonagee allowed Milford’s Abbey Harkin to tap in from close range.

Bonagee started the second half strong and their pressure was rewarded on 40 minutes when Chloe Creevy fired low and hard into the bottom corner to bring it back on level terms.

Neither teams deserved to lose this game and a draw was a fair result in the end.

Best for Milford were Abbey Harkin and Maebh McClean, who was outstanding in defence, while Caitlin Fletcher was best for Bonagee.

A brace of goals apiece from Libby Sachs and Samara McBrearty helped Raphoe on their way to victory against Ballyraine on Monday night, but the scoreline was no reflection of the super football played by the young visitors on the night.

The home side with Caitlin Clarke in fine form in the heart of midfield were on the front foot early on and their early pressure was rewarded when Molly McGroarty gave them the lead.

But the visitors came into the game after that with Cara Shields driving them on from midfield they gave the home defence plenty to think about in the early stages.

Samara McBrearty added a second for Raphoe in the 11th minute and her replacement Libby Sachs fired home two more before the break as Raphoe’s superior strength told.

It was a much more even second half though, Aine O’Flanagan and Tori Clarke linking well with Enya McBride and Molly McGroarty as Raphoe pressed to add to their tally.

However Grace McGlynn was in superb form in goal for the visitors and she saved brilliantly to deny Raphoe time and again.

Defenders Niamh McLaughlin and Cara McGonagle were also excellent in the second half and it took the goal of the night – a brilliant driving run from Samara McBrearty in the 43rd minute – to complete the scoring.

All in all a super game of football with plenty of technical ability on show from both sets of young players.

Raphoe Town Rapids had the edge in a pulsating game against Kilmacrennan Celtic on Monday.

Alisha McCullagh, Cliodhna Kelly and Jessica Patton netted the goals for Raphoe, who just edged things on the night.

Kilmacrennan gave as good as they got with Maeve Brady, from a penalty, and Natasha McGettigan scoring for the Lurgysiders.

Here’s the latest from Donegal Women’s League U16 and U12 games was last modified: May 15th, 2019 by Chris McNulty