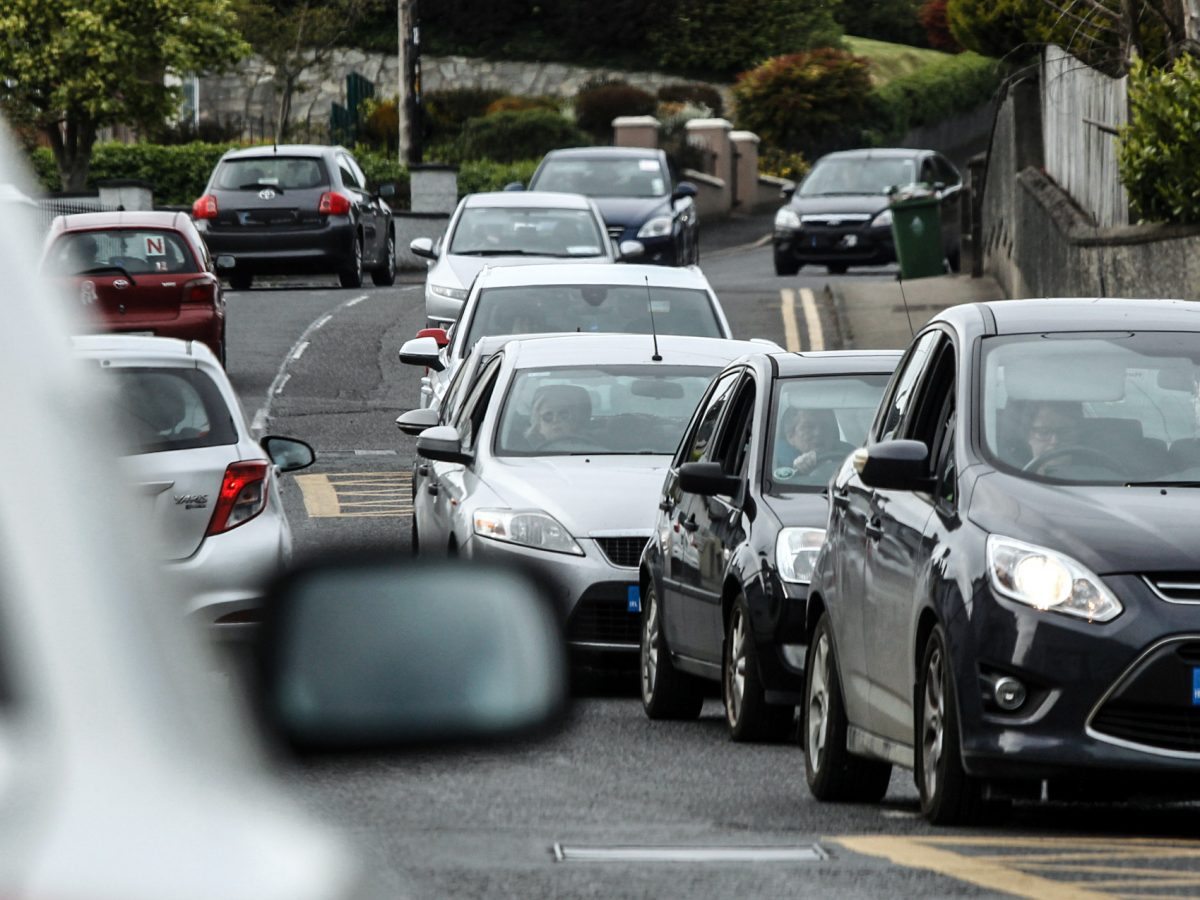 DD Motoring: Does Letterkenny have to come to a standstill?

I think this has been the worst to date and the fact that two major sets of sewage upgrades are happening at the same time has brought the town to a complete standstill.

Traffic forced into a single lane and then sent through the middle of Letterkenny causing long delays in the town this week. Photo Brian McDaid.

Joe Harkin didn’t invent the wheel but he made good use of it while he was in business.

80 years ago in 1938, he opened a bicycle shop on the Port Road in Letterkenny after learning his trade in Calhoun’s Bicycle Shop at the other end of the town at Lower Main St.

Along with repairing bicycles, he was a dab hand at mending clocks and watches.

Joe Harkin to the right at the doorway of his Bicycle Shop on the Port Rd. in Letterkenny.

Joe became famous in Letterkenny for two things, his “cycling man” that he made himself that sat on the window complete with the No 7 on the back of cyclists shirt capturing the amazement of young and old as they watched the paddles go around and round.

Then there was the clock which he also repaired which he had in the shop that never missed a minute.

I was sitting in a traffic jam on Monday evening that stretched from Joe Harkin’s old shop on the Port Road right through to the foot of the town at Lower Main Street in Letterkenny.

Back in Joe’s time, the town was more simple, it had fewer roads and less traffic.

The late Eamon Sam O’Donnel with his grandfather, Joe Harkin’s cyclist which paddle away from morning to night in the Bicycle shop on the Port Road. Photo Brian McDaid

The nearest you got to bypassing Letterkenny was if you turned right at the top of the Port Road and headed up the High Road to head for the likes of Falcarragh or Gweedore.

The Market Square was the hub of the Cathedral Town with bus stops, cafes, taxi ranks, garages, public toilets and plenty of car parking space.

When the Folk Festival arrived the Market Square doubled as an open-air arena as locals landed and built a stage and the ESB and P&T men got a lend of ladders from their work to put up bunting around the town in the evening.

The sponsors gifted them with crates of cigarettes in return for their goodwill.

Back then, even the Christmas lights were switched on from Joe Harkin’s house at the top of the town, which was located where the TSB Bank is now.

No formal switching on of the lights in those days, just stand up on a chair at the meter box behind the from door and screw in a fuse to switch the lights on and then screw out the fuse before Joe went to bed, that was the timer switch of Letterkenny Christmas back then.

In the summer of 74, a gang of men arrived to start work at the back of our home in Wolfe Tone Place and dug a trench which went up to the road at the back of the house and then headed up through the fields into the countryside.

Most of the work was done by hand and it took the men the most of the summer holidays to finish it.

In the evenings when they went home, we used the trenches for playing cowboys and Indians and Hide-and-Seek.

One would count up to a hundred and we would hide in the newly built bunkers and then towards the end of the summer a big digger arrived and filled the trench in.

It turned out it was the sewer pipes for the second phase of Dr Mcginley Road housing estate.

Spokes on a wheel

I know you never would get away with any of that now, but back then the community were the spokes in the business wheel that was Letterkenny.

Sitting in traffic jam after traffic jam this week makes me think how disconnected Letterkenny has become from itself.

Who, what or where is the hub of this town anymore?

The drive to expand and extend the boundaries without getting a chance to put a proper structure in place and finish plans for link roads which are included in roundabouts that now sit idle going nowhere.

On of the many Tail Back in Letterkenny, this week at work continues on the upgrading of the sewage system in Letterkenny. Photo Brian McDaid.

Letterkenny is hard to get through at the best of times even without any roadworks.

They arteries in Letterkenny are smaller than the flow that is being forced through them morning noon and night.

The hub in Letterkenny has too few spokes connecting it with the rim on the outside.

Driver at breaking point in Letterkenny this week as traffic is backed up in every direction on Letterkenny. Photo Brian McDaid.

And even the late Joe Harkin could have told you that a hub had to be connected and balanced with the rim in order to keep the rim true.

Wheel builders like Joe Harkin knew the connection with the hub. Its spokes and the rim needed to be balanced in order for a wheel to run straight and true.

A hub, spokes and a wheel – all of which are required as part of a wheel.

Overnighting a single spoke can kink the wheel and in the case of Letterkenny’s traffic, too few spokes in the shape of unfinished link roads are the problems faced with traffic in Letterkenny.

DD Motoring: Does Letterkenny have to come to a standstill? was last modified: May 16th, 2019 by Brian McDaid