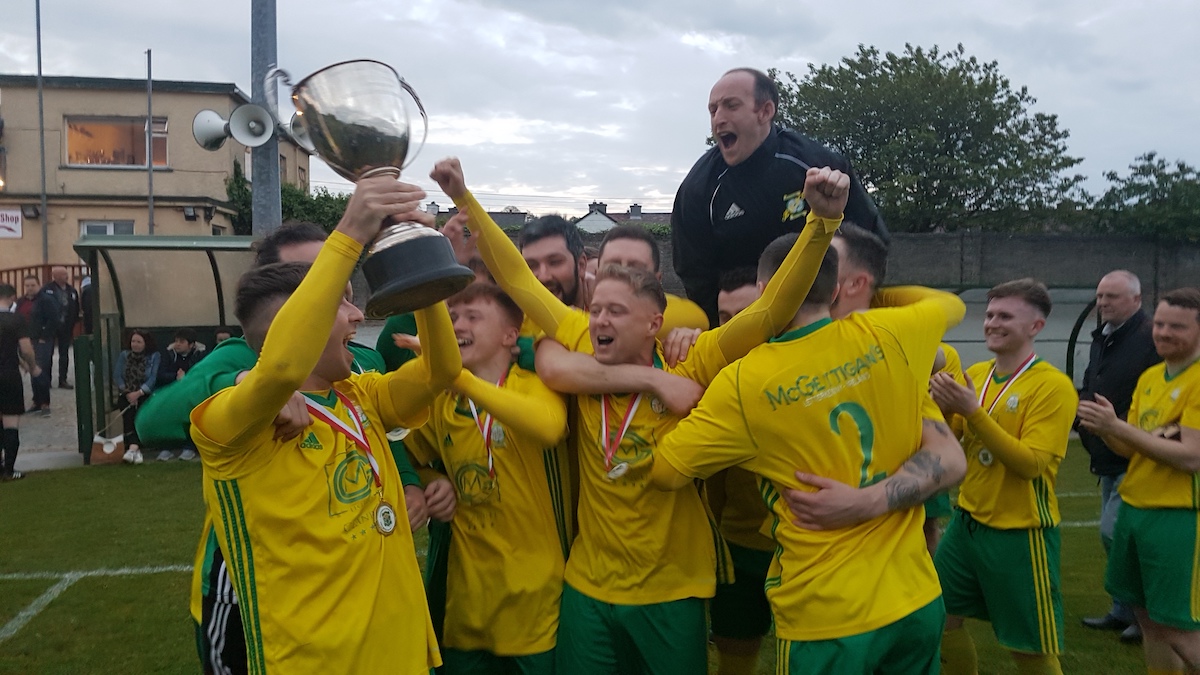 Bonagee United secured their first Knockalla Caravan Senior Cup since 2012 with a convincing 3-0 victory over Glengad United at Maginn Park in Buncrana.

Bonagee United, who saw off Greencastle 2-0 in a semi-final on April 30, also secured manager Jason Gibson his third triumph in the competition, his last victory coming in 2013 against Glengad.

If cards were plentiful, goalscoring chances proved more difficult to come by.

And it was far from an action-packed first half in Buncrana, with either side starting at a pedestrian pace, apart from the goal after five minutes, which was the best bit of play in the first half.

Against Glengad United, who looked jaded all over the park and were without three or four of their key players, Bonagee scampered on the counter-attack after five minutes.

Mark Harkin got the better of James McKinney on the right-flank, powering past the full-back, before squaring one up for the incoming Jason Armstrong.

Armstrong, from 12-yards, had plenty of time and space to pick his spot before placing it straight down the middle, surpassing Kevin McLaughlin in the Glengad goal.

Clear-cut chances were few and far between in Buncrana after the goal, however, and it was midway through the first half before either side created anything creative going forward.

The north Inishowen side were arguably the better outfit for the opening 45 minutes, but they were limited to very few chances in front of goal in the opening period.

Shane Byrne’s sides’ first opportunity of the contest came five minutes before half-time as Stephen McLaughlin had an effort from distance but Eugene Ferry stood firm to parry it away from danger.

On top, Glengad continued in search of an equaliser but it never came despite Matthew Byrne going close just before the break with an inswinging effort that went inches beyond the post.

Shortly after the restart, Glengad remained on top but their lack of ruthlessness in front of goal – Stephen McLaughlin missing an unchallenged close-range exchange after 46 minutes – proved to be costly.

Two quick goals from Bonagee all but sealed the deal with almost half an hour left of the final contest.

The introduction of Chris Flanagan and Chris at half-time proved the right call from Gibson as they injected life back into the Bonagee system.

And after a prolonged wait, Michael Doherty calmy slotted Bonagee’s second to give Glengad more than the Mountain Road to climb in the second half.

And if Bonagee already had one hand firmly on the Knockalla Cup after the penalty, they guaranteed it was coming home to Dry Arch Park when the man of the match, Ryan Rainey, sealed Gibson sides’ third after 56 minutes.

Ryan Rainey was Man of the Match

It was the Bonagee that was expected for most of the contest and when they got going they didn’t look back.

After the hour mark and Glengad, despite not looking like scoring and well-beaten, remained professional throughout.

On another night things could have been so much different for Byrne’s side as they created two more half-chances, but again, they failed to capitalise in front of an experience Ferry.

An extra layer of gloss should have been added for Bonagee in injury time when second-half substitute Darren McFadden was through one-on-one with McLaughlin.

However, the striker scuppered his chance, failing to divert his effort in what would have been the perfect ending for his team.

The victory brings Bonagee United their first Knockalla Caravans Trophy in seven years, while Glengad, despite failing to win a trophy for the first time in several years, can be proud of their endeavours this season.