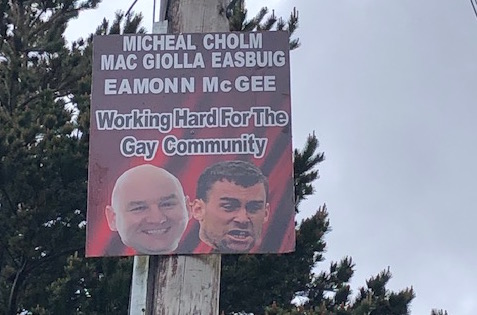 Confusion over erection of mysterious posters in West Donegal

written by Staff Writer May 20, 2019
Facebook0Tweet0LinkedIn0Print0

A Donegal county councillor has reacted after dozens of posters thanking him and a well-known Donegal GAA star for working for the gay community appeared on lamp-posts.

Cllr Mac Giolla Easbuig said he does not know who is responsible for erecting the posters.

But he added “I would like to thank the “anonymous” people who put up posters in Gaoth Dobhaire acknowledging my support for the gay community in Donegal.

“I will continue to do whatever I can to support oppressed, marginalised communities throughout the county, but it’s nice to get some recognition for that support.”

Cllr Mac Giolla Easbuig is seeking to retain his position as a county councillor in the local elections this weekend.

Mr McGee is a well-known commentator and activist but is not standing for election.