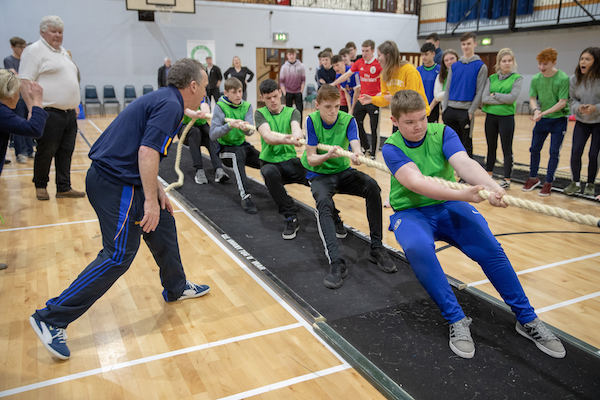 Donegal schools ‘pulling together’ for the one goal

Donegal Sports Partnership (DSP) have teamed up with the Irish Tug Of War Association (ITOWA) to roll out a secondary schools programme ahead of the World Indoor Tug Of War Championships which take place in Letterkenny next year.

Given that there are two extremely active tug of war clubs in Clonmany and Carndonagh, Inishowen was the target area for the TrY tug of war workshops.

The workshops for the TY students were delivered by local members – Daniel Doherty and Peter McGonigle.

Speaking after attending the blitz at Clonmany Community Centre, ITOWA regional development officer, Cathy O’Toole, said: “209 TY students participated in the programme with all of them completing the coaching workshops. They competed at a blitz and will host a one-day in-house first year blitz involving 220 students.

“To have 429 secondary school students from the Inishowen peninsula introduced to the sport of tug of war is a really positive development. A number of students have committed to training at the Clonmany Tug of War Club also.”

“Students from each of the three schools will be given the opportunity to participate and represent their school at the World Indoor Championships which will be held in Aura Leisure CentreLetterkenny in February, 2020,” the regional development officer added.

A number of students have been identified by the ITOWA as having potential for the Irish youth teams (boys and girls aged 12-18) and will be given the opportunity to train with the Clonmany and Carndonagh clubs.

Around 1,200 are expected to compete in the World Indoor Championships which the ITOWA will host at the Aura Leisure Centre in Letterkenny from February 20th-24th2020.

“China, Chinese Tapai, Singapore, South Africa, Holland and Spain are just some of the nations who will travel to Donegal for the event.”

A schools’ competition will also be part of the championships.
Commenting on the initiative between the two organisations, DSP Community Sports Development Officer, Karen Guthrie said: “The idea was to engage young people in tug of war ahead of the World Indoor Championships and to give them the opportunity to try the sport.

“The quality of those who were pulling last week was really high and the general view was that some of the students have serious potential to make national teams at certain weights. In essence, second level students from Donegal are getting a chance to pull for their country.”

“Tug of war is a sport that is extremely prominent in North Donegal and the demand for inclusion is massive. We’re delighted to be involved,” Karen added.

Donegal schools ‘pulling together’ for the one goal was last modified: May 19th, 2019 by Staff Writer