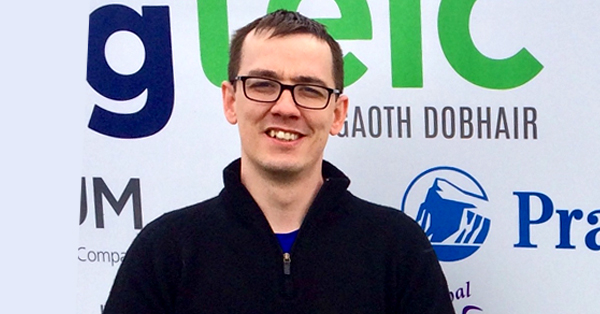 Persistent Padraig overcomes the odds to inspire others

written by Rachel McLaughlin May 21, 2019
Facebook0Tweet0LinkedIn0Print0

A young Donegal man is inspiring others with his career progress and ever-positive attitude after a lifetime of medical battles.

When Padraig Ferry started his new job at Pramerica in February he was asked to pick a song that best described himself. He chose ‘I’m Still Standing’ by Elton John.

This was a fitting choice, since the 29-year-old had overcome so many obstacles to get to this point.

Padraig suffered his first brain aneurysm at the age of 10. He was playing football outside his home in Loughanure when an extreme pain went through his head and he lost his sight.

He was rushed to Beaumont Hospital, but when he woke up, he could not talk and had developed a lasting tremor. He was bed-bound for three months.

“I basically had to start all over again. I knew at that stage I had an awful mountain to climb to get back to where I was,” Padraig told Donegal Daily.

But the competitive kid looked up to his sporting heroes, such as the Donegal ’92 champions, to get back on his feet. He stunned medics when he walked back into rehab months later. He returned to school after that and progressed straight into secondary school at Rosses CC.

Padraig went on to study for an honours degree in IT and Business Management at LYIT. But the career struggles began college when started to look for a job.

“The problem was that I had no experience. It’s worse when you have a head injury, for liability reasons some employers don’t want to take you on.

“I wasn’t going to stop at that. I did an ETB course in Manual and Computerised Accounting. I finally got an interview with Phonewatch in Letterkenny.”

Fate dealt Padraig another bad hand in 2015 when he was struck with a second aneurysm.

“I had just made a sale at work. I went home and the pain came again. I knew what it was and I thought this was it. I knew my eyesight was going to go so I ran to my neighbour’s and by pure luck, she was in and rang an ambulance.”

That hill I was climbing? This knocked me back down. I had to do rehab all over again.

The National Rehabilitation Hospital (NRH) encouraged Padraig to join the Letterkenny Men’s Shed as part of his recovery. The activities helped him with his tremor, the conversations helped him mentally, and the group led him to find even greater opportunities with work.

“I was only after getting my degree, finding a job was the one thing I had to do. I would be a bit stubborn,” he said.

Padraig’s Job Coach Iarla McGowan gave him the confidence boost that he needed.

“I told Iarla my story and he said ‘I want to get you set up for a career’. I liked the sound of that,” Padraig said. 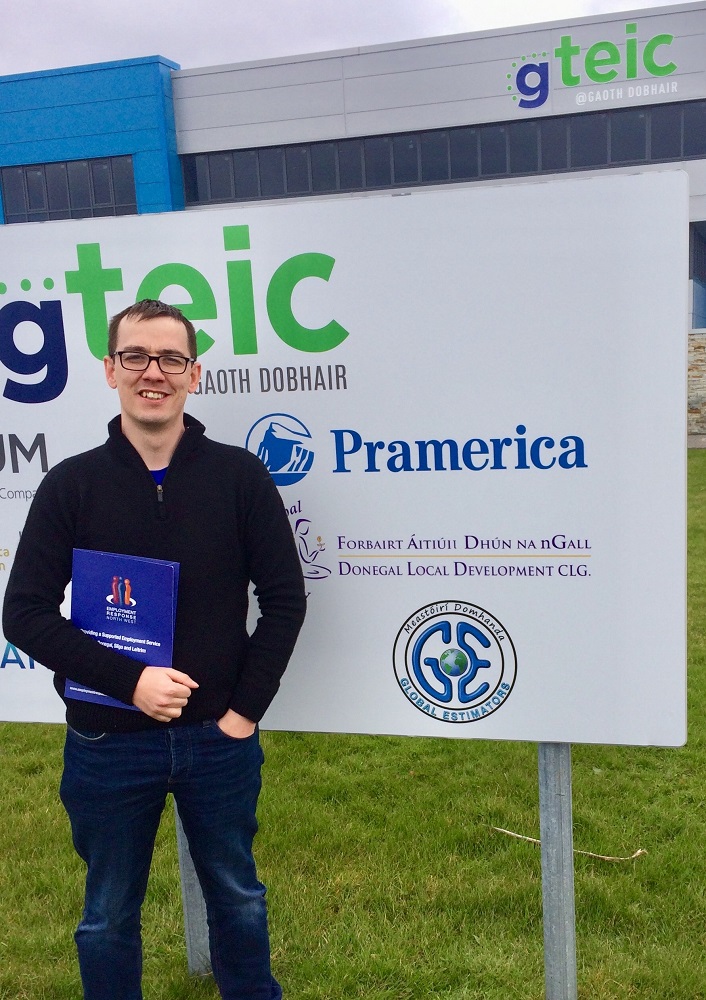 Padraig Ferry is now the Mental Health Ambassador for Pramerica

Through ERNW, Padraig was encouraged to apply for a job in Pramerica as they expanded their team in Gaoth Dobhair. The job offer came as the ‘best news’, he said, just before Christmas 2018.

Padraig now works in a customer service team for the American multinational. His determination to rise against adversity has already earned him the title of Pramerica’s Mental Health Ambassador.

If my story can help people then it’s worth telling.

“I’ll be there for anyone who is going through anything, they can talk to me and I will be there to listen and share my experiences,” he said.

Padraig said that he is immensely grateful to ERNW for helping him to get his foot on the career ladder.

His mother Susie was his rock through every experience.

There was no bigger help than my mum. She is the strongest woman I know. I fell so many days and she picked me up.

Padraig’s girlfriend was also by his side through the setbacks of the second aneurysm and helped him find the confidence to go for a new career.

“People like that is why I’m here. And if I can help anyone after all the help I’ve received then it’s all the better,” he said.

Padraig’s spirit has earned him much admiration from those who were part of his journey.

“He is a brilliant young man. He wears a smile on his face from the beginning of the day until the end.

“He has shown, in all the time I have known him, a desire to beat the hand he has been dealt and I am all the richer for meeting him.

“He is an inspirational young man and I hope that he can inspire others who feel they have little hope of gaining suitable employment because of their own individual setbacks.

“The opportunity that Pramerica have given Padraig is massive. It has a been a real pleasure working with the HR team up there, who have worked hard at consciously creating career opportunities within the company for people with disabilities and that has to be highly commended.”

John Gorman, Principal of Rosses Community School, said that Padraig was a student who left a lasting impact on his school.

“Padraig is a living lesson to every teacher that support and looking for that special spark in a student should always be core to their teaching and of their vocation.

“I had the pleasure of teaching Padraig in English class. His wonderful attitude, sense of fun and always looking for the bright aspect of life and opportunity was a pleasure to witness.

“As a school and as a teacher I am so proud of what he has achieved to date, a gentleman in every aspect of that word. Pramerica are very lucky to have gained this young man. They will be a great fit as I know the company work so hard to develop their people.”

Employment Response North West (ERNW) hopes that Padraig’s appointment will inspire others to avail of their service and also employers, who may not have been aware of the service. The service, which is free, offers equal support to both potential service users and employers both before and during employment.

Anyone wishing to avail of this service should contact their local Social Welfare Office. The Letterkenny branch of ERNW is located in the Grand Central Building (first floor). The West Donegal Office is based in An tSean Bheairic, Falcarragh and the South Donegal office is based in the Public Services Centre, Donegal Town. To get in touch with ERNW call 074 9129779 or visit employmentresponse.ie.