Donegal schools get the Green Flag of approval

written by Stephen Maguire May 22, 2019
FacebookTweetLinkedInPrint

Schools from all over Donegal descended on the Radisson Blu Hotel in Letterkenny for the annual Donegal Green Schools Awards.

A large gathering of pupils and teachers were welcomed by Green Schools Manager, Cathy Baxter, in what was a great day of celebration.

Scoil Cholmcille Letterkenny, in particular, were there to be awarded with their 10th Green Flag which is a fantastic achievement marking over 20 years in the Green Schools programme.

The Green Schools programme in Ireland is in its 22nd year with 94% of schools participating. Ireland has the highest percentage of awarded flags out of all the participating countries in the world and is seen as an example of best practise by lots of the other countries.

In Donegal, there are 195 schools registered with the programme with 164 Green Flags proudly flying. Donegal schools were some of the first schools to get involved in the Green Schools programme when it started 22 years ago, and it is still going strong. Donegal County Council play a very important role in the implementation of the programme within the County. 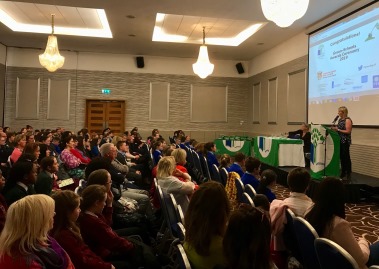 She said “The benefits are tremendous not only are we educating our pupils for the future but the positive environmental impacts each school is making cannot be underestimated”.

Donegal schools get the Green Flag of approval was last modified: May 23rd, 2019 by Stephen Maguire
FacebookTweetLinkedInPrint
Tags:
awardsdonegalGreen Flag