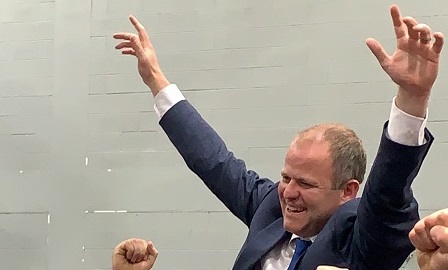 The Letterkenny count was wrapped up with four quick elections tonight in the Aura Count Centre.

Donal Coyle became the first newcomer to win a seat in the Letterkenny Electoral Area.

He was elected to the fourth seat with 1,444 votes.

A recently retired school principal of 32 years, Donal joined the Fianna Fáil ticket for Letterkenny this May with re-elected councillor Ciaran Brogan and Manus Kelly.

He has been a political activist for many years and has a strong community and sporting background.

A born and bred Letterkenny man, this is the first time the bakery manager has entered local politics. He finished with 1,465 votes.

His campaign was based around a promise to work hard and honestly for the people of Letterkenny.

He will be the only Sinn Féin candidate in the council this term, after his party colleague Adrian Glackin had a disappointing loss in the eighth count.

Manus Mandy Kelly and his support team celebrate his election

Aontú candidate Mary T Sweeney fell at the final hurdle in Letterkenny. She made a strong impression with a good run throughout the day, eventually finishing with 1,108 votes.

The Letterkenny Electoral Area Councillors of 2019 are: