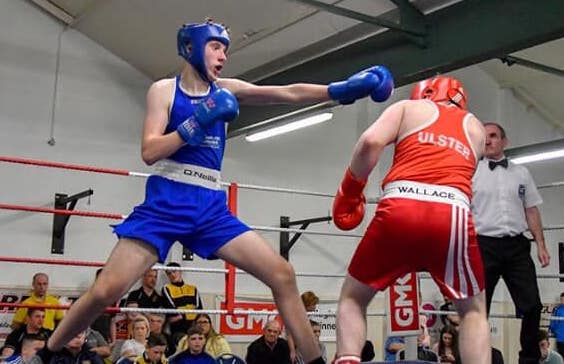 Letterkenny ABC’s Harry Good booked a spot in the semi-finals at the Boy 4 and Junior 1 & 2 Championships at the National Stadium this weekend.

Good defeated Lennon Meade from Hyland in a Junior 1 quarter-final.

Good overcame Meade on a 4-1 split decision to book a place in the middleweight semi-finals. There, next weekend, Good will come up against Martin Mongan from the Our Lady Of Lourdes BC in Limerick.

In a Boy 4 quarter-final, Liam Crawford of Raphoe was beaten by David O’Hara. In the 57kgs match-up, O’Hara, from the St John Bosco club in Antrim, took the unanimous decision.

In a 63kgs bout in the Boy 4 section, Dean Doherty from Carndonagh was stopped in the second round by John Fay from Swords.

Next weekend there will be six other Donegal punchers, all recently-crowned Ulster champions, taking to the ring, like Good.