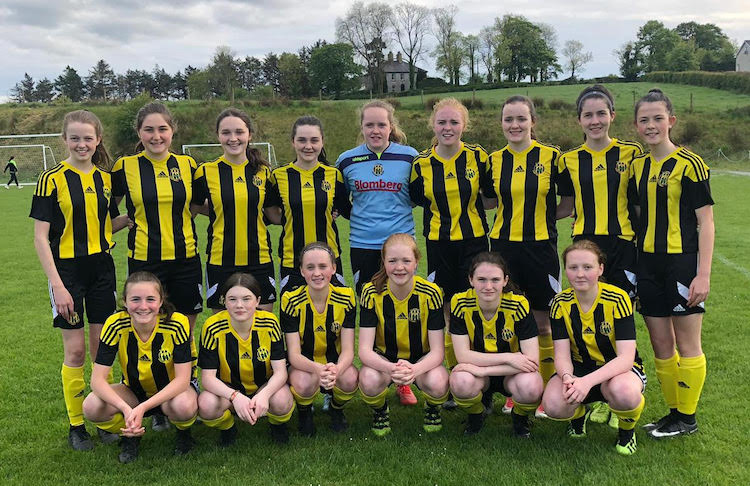 The Donegal Women’s League action continues to enthralled with a number of closely-fought games taking place over the last week. Here’s a roundup of all the action.

This league encounter was played on Wednesday evening in ideal conditions in Illistrin and both teams deserve a lot of credit for a very entertaining game.

A large crowd gathered for what was an excellent advertisement for the Donegal Women’s League. In the end the more experienced Illistrin (pictured) team took all three points but were made to battle all the way by this young enthusiastic Mulroy team.

The away team started strongly and almost caught Orla Corry out in the Illistrin nets but she reacted well to deflect the ball for a corner after good work from Megan McLaughlin and Lisa Dugera.

Alisha Tobin was involved a lot in the first half up the right side for Illistrin and combined well with Aobha Gallagher who was solid in midfield.  Mulroy were always dangerous on the break with Caoimhe Herron showing great skill and Aoife Sweeney was delivering great passes to release her. Mulroy keeper Meabh Duffy showed great handling ability as shots from range came in from Emily Irwin and Aislinn Coll.  Aibhe McDaid and Rebekah McGlinchey were solid in defence for Illistrin.

Although Illistrin deserved their half time lead, Mulroy came out in the second half and lifted the intensity.  Rachel Friel showed great awareness and skill in midfield, along with Marie Kerr, and she fed the skilful Clodagh Herron who in turn crossed the ball to the back post where the unlucky Illistrin defender sliced the ball into her own net to level the match.

Sophie Curran and Aobha Harrigan were attacking well for Illistrin and Mulroy defenders Leah McLaughlin and Caitlin Heraghty did well to stop numerous attacks.  Aislinn Coll delivered a great through ball to Nicole McDaid and she produced a fine finish to restore the lead for Illistrin. Maria Kealy’s strike from 30 yards was well saved by Meabh Duffy as she helped the ball onto the post.  Mulroy struck back soon after this when the ball fell to Aoife Gibbons in the box after a corner and she struck the ball home to level the game again.

With 10 minutes left on the clock Illistrin took the lead for the third time when a great ball from Erika Gallagher released Jodie McFadden and she made no mistake as she blasted home from the edge of the box.

Ciara Doherty went close after a good cross from Jodie McFadden soon after. An exciting game that flowed from end to end with Illistrin just about shading it with the chances they created throughout the 80 minutes.

Gabrielle O’Donnell scored six for Lagan, while Maria Boner hit three and Lucy Canning also got on the score sheet.

However, it was an excellent team performance from Lagan, who were six up at the break.

The second half was to get a lot worse for the hosts. Valley went down to nine players after illness and injury took hold and the home team  reshuffled but it got no better as Valleys’s stand-in keeper was unable to prevent Lagan’s dominance in front of goal, Credit to the Valley girls as they gave a spirited and much improved second half  as the only threat on the Lagan goal was from long range.

This eagerly awaited contest between two unbeaten teams in the league took place on the excellent playing field in Illistrin on a lovely May evening.  Both teams did not disappoint the large crowd as they served up a game that a was a great advertisement for girls football. In the end a draw was fair result as both teams give everything they had.

The home team started brightly and controlled the opening period as the midfield pairing of Sarah McGinley and Erika Gallagher supplied excellent through balls to Ciara Molloy but the Mulroy defence was well marshalled by Caitlin Heraghty.

Emily Irwin was having an influence from right back and combined well with Grace Nugent who put in a couple of dangerous crosses. On the other wing Nicole McDaid got into some good positions and found McGinley but her shot was well saved by Leah McLaughlin.

Mulroy’s Clodagh Herron and Eva Blaney were always a threat in the first half for Mulroy down the left and forced a couple of corners and a few great crosses that Aobha Harrigan and Meabh Devenney dealt with well.  Rachel Friel turned neatly for Mulroy before halftime but the ever reliable Darcey Kelly put in a brilliant block.

In the second half Iseult Ni Mhathuna and Megan McLaughlin were having a lot more joy in the central area of the pitch for Mulroy and as a result they became more of a threat going forward.  The lively Friel was looking dangerous but Aoibhin Randles in the Illistrin goals did well when called upon.

Leanne McGettigan almost scored after a corner for Illistrin but her attempt was well blocked by Mulroy defender Aoife Sweeney.

The chance of the game came to Illistrin when Ciara Doherty got onto a fine pass from Erika Gallagher after good work from Katelyn Doherty and she did well to get in front of the defender but her toe poke was well saved by the Mulroy keeper as she tipped it over the bar.

Both teams had to settle for a well earned point as the game was played at an exhilarating pace from start to finish.

In what was an entertaining game at goose green it was the Valley girls who left with the three points in the bag.

A depleted Bonagee team threw everything but the kitchen sink at them but only for the presence of Claire diver in the valley nets it could have been a different story.

Bonagee started very well with Grace Murphy and Hannah Hopkins linking well only for Murphy’s shot to be saved by Diver.

Amy Callaghan marshalled the midfield well for the Bonagee girls and could have put Bonagee one up after breaking through but only to shoot wide.

Cliodhna Patton, who had another exceptional game at right back, was making some great runs out wide and and had some nice balls into the box.
Second half saw more attacking play from Bonagee but Shiela McElchar kept the Valley defence tight and Claire diver was letting nothing past her.

Ella Black made some fine runs linking well with Cutliffe and was solid in defence too.

With minutes left in the game valley had a shot on goal with Aleysia Alcorn making a fine save with the resulting corner Sarah Conaghan scored inside the box.

What a great evening for a game of football, which seen Swilly travelling to Gweedore.

Gweedore Celtic opened the scoring with a great goal from Chloe McCole, Sheila Ferry added a second goal not long after to leave Gweedore two up at half time.

Swilly continued to put pressure on Gweedore and where rewarded when they pulled one back through Caitlain Doherty.

Both team continued to press hard.

Meave Boyle was unlucky not to scored when she was one-on-one with Swilly keeper Mae McCarron who played her first game in goals tonight.

Swilly found the back of the net again through Caitlain Doherty. This game was anyone now for the taken with both team looking for the three points, but it was Gweedore Celtic for the taking with another great goal from Chole McCole after beating Swilly Defence.

Here’s a full roundup of the Donegal Women’s League action was last modified: May 26th, 2019 by Chris McNulty