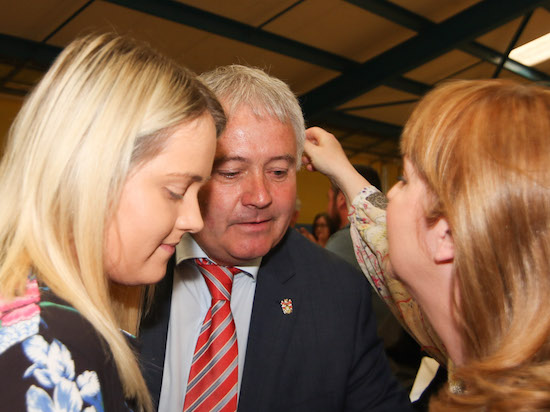 written by Stephen Maguire May 26, 2019
Facebook0Tweet0LinkedIn0Print0

Finn Valley poll-topper Martin Harley has paid tribute to his family and friends after he was given a huge endorsement by the people to continue as a county councillor.

Public Harley increased his personal vote by 550 votes from his last outing five years ago.

The Harley family suffered a personal tragedy when they lost their 19 year old daughter Kym in a road tragedy in late 2014.

An emotional Mr Harley told Donegal Daily that he was “humbled” by the support he has received in recent weeks.

“I am humbled. It’s been a very difficult four and a half years for the family including my wife Denise.

“When I knocked on doors people told me that they were voting for Martin Harley no matter what party I was with and I appreciate that.

“I am a Fine Gael man but I will help anybody no matter what their background,” he said.

Councillor Harley said there was no question he was hurt by the manner in which Frank McBrearty was brought into the Fine Gael camp to run in this election.

“I have absolutely no issue with Frank and I think he does great work in his area.

“But I was upset at the manner in which another candidate was brought in. I was told nothing about those plans by the party. I heard it first from a friend by phone after it had been agreed. I was never consulted.

“But I am a Fine Gael man and I will be actively looking at the results around the rest of the county to see where we are picking up seats,” he added.

He added that he thought the possibility of a third Fine Gael seat in the Lifford/Stranorlar area is a “strong possibility.”

“I think it will be very tight and it’s very hard to call.

“As a person and a community worker I have so much time for Liam Doherty and the work he has done but I think Fine Gael have a strong chance of that last seat with Garvan Connolly.

“It could be a long day and night and I wouldn’t rule out a recount,” he said.