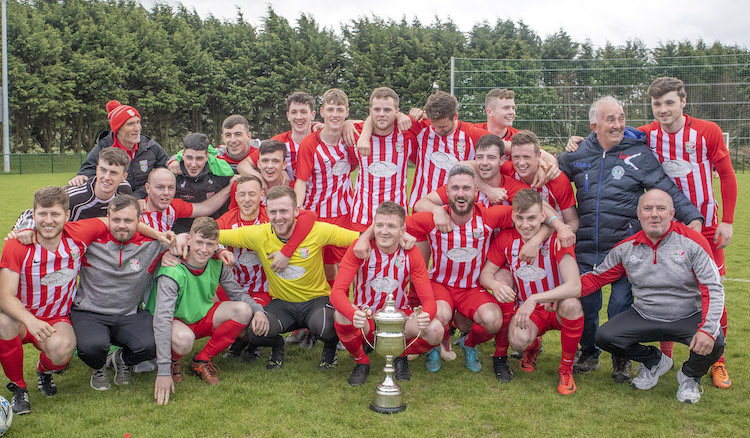 Report: Cup glory for Keadue after come-from-behind win over Milford

written by Staff Writer May 26, 2019
FacebookTweetLinkedInPrint

Keadue Rovers lifted the Brian McCormick Cup after coming from behind to defeat Milford United at Diamond Park.

By Stuart Connolly at The Diamond Park

The wind picked up as the game began, causing early problems for the set piece takers, with many free kicks flying well over the bar at either side.

Milford created the games first concrete chance, Gary Merritt played a ball over the top for Kyle Black, who looked offside but raced towards goal as the onrushing Declan Ward attempted to thwart the effort, the Milford front man lobbed Ward but he had his head in his hands as his chip bounced wide.

Keadue may feel they should have had at least one penalty after the halfway point in the first half, Aaron McCafferty brought down by Adam Serrinha was the first tackle in question but nothing given. Chris Greene was next to ask questions after being fouled in the area but it was met with the same reply.

Milford had a couple of efforts as the half wore on, going close more than once but they couldn’t convert.

These sides last met in April, with Keadue winning on that occasion, but Milford drew first blood in this fixture.

Johnny Logue played a short ball over the defence and Kyle Black got on the end of it before preparing himself for the shot, which he placed into the bottom right corner.

Teams are often vulnerable after scoring and that proved the case as Keadue replied instantly. Jack Boyle whipped a ball in from the left and Cory Gallagher blasted home from close range as the sides went into the break level.

Keadue started the better side after the interval, but were limited to half chances, Luke Neely went awfully close with a well hit volley after the hour as the game was enduring a relatively quiet spell.

With a little under 20 minutes to go, Keadue took the lead. Adam Neely, who was not on the field long, struck with his left foot from 25 yards and it flew into the top left corner.

Keadue had chances to finish the game but Caolan McGettigan kept his side in the fight, Milford had chances themselves to force extra time but Danny Doogan’s side held on to be the third different team to win the Brian McCormick Cup in three years.