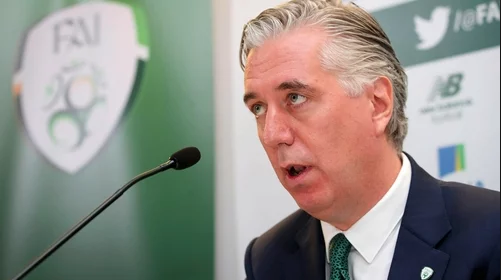 written by Chris McNulty May 29, 2019
Facebook0Tweet0LinkedIn0Print0

Donegal League secretary Jimmy Haughey, at last night’s annual general meeting of the Donegal League, expressed confidence that various investigations into the beleaguered FAI would be ‘dealt with in a transparent manner’.

In his annual report, presented to delegates at the AGM, Mr Haughey said the League wished Delaney ‘well for the future’.

Delaney has been shrouded in controversy since March when The Sunday Times revealed that he had written a €100,000 cheque to the FAI in 2017.

Delaney stepped down as CEO and assumed a role as executive Vice President. However, Delaney is now on voluntary gardening leave.

“We wish John Delaney well for the future; he has been the subject of much comment recently regarding his role in the FAI,” Mr Haughey said in his report.

“We have always found him to be helpful, courteous and pleasant in all our dealings with him.

“We acknowledge his support of the grassroots soccer in Ireland and it was he who brought the FAI beyond the M50 to the rural leagues.

“We especially remember the FAI AGM in Donegal in conjunction with our 40th anniversary celebrations.”

There are presently two investigations into finances and governance in the FAI underway – one by Mazars and the other by the Office of the Director of Corporate Enforcement.

Some of the Donegal League executive have met with FAI bosses in recent weeks.

Mr Haughey said: “The past year has seen our national body, the FAI, in turmoil regarding issues of corporate governance. This has led to a lot of adverse publicity for the association.

“Having had recent with the FAI President Donal Conway and acting CEO Rea Walshe, we are confident that all matters of concern raised are being investigated and dealt with in a transparent manner.”

Part of a boat or plane? Mystery...

Woman and dog rescued in the nick...