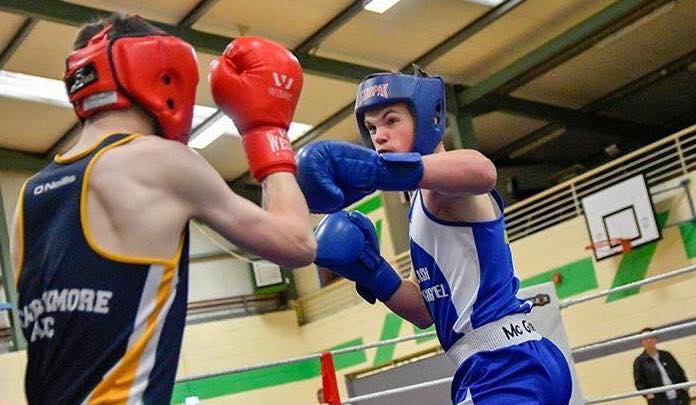 Donegal is well represented at the semi-finals of the Boy 4 and Junior 1 and 2 Championships at the National Stadium this weekend.

Eight Donegal boxers will go through the ropes at the National Stadium.

Picture: Odhrán McGinley of Dunfanaghy ABC who is in semi-final action this weekend in Dublin.

Good was in action last weekend in a quarter-final and he overcame Lennon Meade from Hyland in a Junior 1 75kgs quarter-final. Now, Letterkenny’s new kid on the block faces Martin Mongans from Our Lady Of Lourdes in Limerick in a semi-final on Saturday.

McShane, a former Irish champion, will take on Oisin Mulholland of East Down in a Junior 2 48kgs semi on Saturday.

Lynch, Hall and McDonagh get the Donegal action underway on Friday evening, all at Boy 4 level.

In a 36kgs semi, Lynch meets Paddy Cleary from Olympic (Galway), Hall faces Drimnagh’s Martin Collins at 39kgs while McDonagh squares up to Michael Lawrence of Trinity Boys in a 52kgs semi.

On Saturday, Gormley will go toe-to-toe with Charleville’s Dave O’Neill in a Junior 1 54kgs semi, McGinley has opposition from Luka Gureshidze of Togher in a Junior 1 66kgs semi, while Callaghan trades leather with Jake McMahon (Liberty) in a Junior 2 semi-final at 52kgs.

Friday’s start time is 5pm because of the 36-bout program.

Saturday’s Junior 1 semi-finals begin at 10am and the Junior 2 semi-finals at 3.30pm to facilitate football fans who want to watch the Champions League final between Liverpool and Tottenham Hotspur.