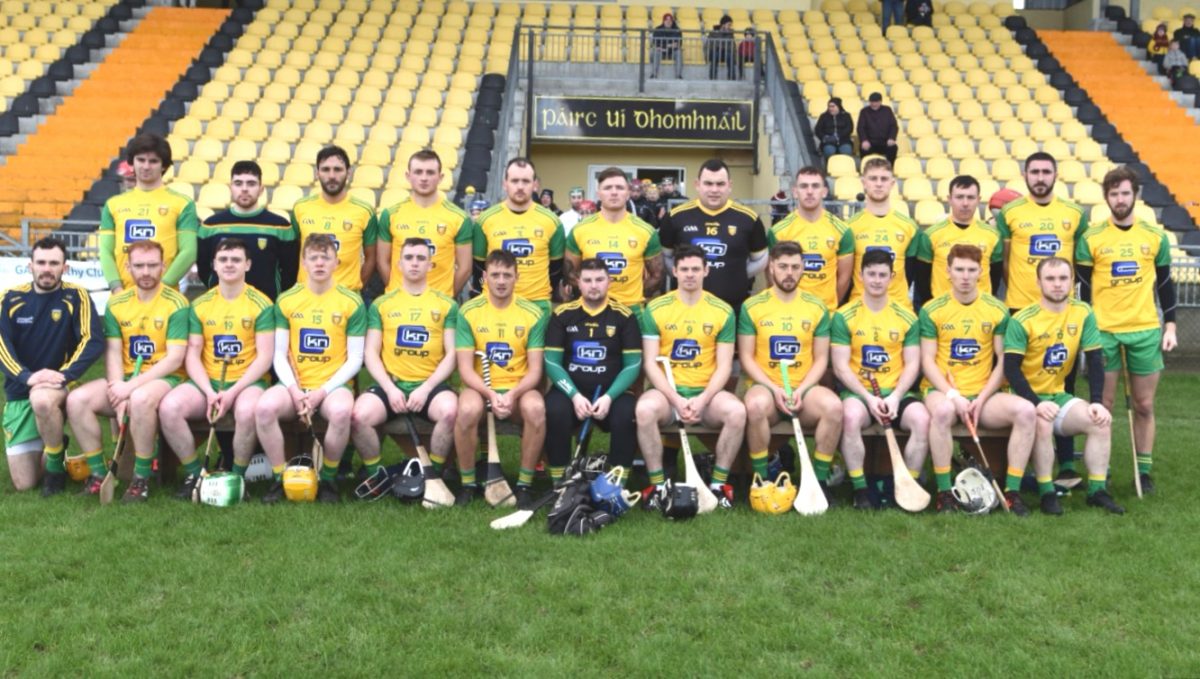 The Sands brothers, Daithi and Eoghan, each scored a hat-trick as Down proved much too strong for Donegal in the Christy Ring Cup.

The Sands’ were on fire and Paul Sheehan hit seven points as Mourne side defeated Donegal by 22 at O’Donnell Park – a result that means Donegal will have to contest a relegation play-off to save their Christy Ring status.

A Gavin Browne goal in the first half had Donegal within five points, but Eoghan Sands’ brace in the final five minutes of the first half put Down into an unassailable lead – and Ronan Sheeh

Eoghan Sands tucked home from the edge of the square with the Tir Chonaill defence at sea. Sands turned the screw even further when he held off the advances of Christopher McDermott to finish Down’s fourth goal.

Down were 11 points to the good at half-time and, after Ciaran Matthewson netted a penalty for Donegal, Daithi Sands completed his hat-trick, powering past Donegal net-minder Paul Burns after cutting in from the right flank.

Two minutes from the end, Eoghan Sands got on the end of a long ball and bundled home a sixth goal for the visitors. There was till time for substitute Ronan Blair to fire home a penalty, completing the rout with the final puck of the afternoon and finally putting Donegal out of their misery.

Browne, Matthewson and Colm Flood drilled over a trio of early points to give Donegal the advantage, after Tim Prenter and Paul Sheehan struck in the opening two minutes.

Down, though, soon warmed to the task and they struck gold in the 13th minute when Daithi Sands soared in on the left-hand side before arrowing a super finish past Burns.

Matthewson (2) and Ciaran Finn kept Donegal in touch, but Down landed a second goal when Oisin MacManus picked out Daithi Sands and he made no mistake from close range.

In between times, Burns came to the Donegal rescue when he superbly diverted away a 16th minute penalty, taken by Down goalkeeper Stephen Keith, after Niall Cleary was deemed to have fouled Eoghan Sands.

Midfielder Liam Savage angled over from distance and an expert free from Sheehan stretched the lead out to eight points.

Still without the injured Declan Coulter, Donegal were dealt a blow here with Lee Henderson unable to start, meaning the hosts were down a some of the most potent weapons in their arsenal.

Just when the game was threatening to run away from Donegal, Browne smashed to the bottom corner to reduce the arrears for Mickey McCann’s men, but Eoghan Sands’ double put the game to bed before the interval, when Down led 4-11 to 1-9.

Donegal had their hopes ignited by a goal from Matthewson, whose 1-10 wasn’t enough to inspire a comeback as Down, who had ten different scorers on the board, eased to victory.