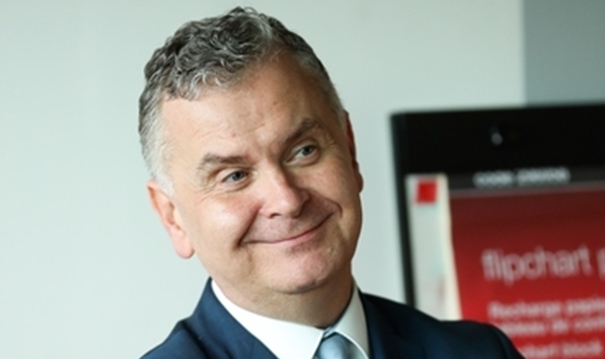 My Donegal – with musician, journalist and PR specialist Garrett Harte

Garrett Harte, is the founder of Harte Media, specialising in PR and Communications strategy. A native of Raphoe, he is the former Editor in Chief of Newstalk. His band The Lost play at Oakfest in Raphoe this evening. This is his ‘My Donegal.’

Where is your favourite place in Donegal and why?

Tough one as there are so many places to choose from!
If I go back to my childhood then I have great memories of spending weekends with my Mum & Dad at the beach in Rathmullan. Diving off the pier with my brother Emmet and eating sand soaked sandwiches washed down with gallons of Football Special!
Going to Rathmullen now still brings back those great times.

Where in Donegal do you call home?

Raphoe, the smallest city in the British Isles!
It was a great town to grow up in. Football, music and devilment!

There are two people to be honest. My late father, Paddy, and my mother, Rosaleen. They both dedicated their lives to public service, instilling the importance of social justice, community and fairness. My father was a source of great strength and I miss not being able to call on his advice. My mother is the boss in the house, always with wise words and a positive outlook.

What do you think is Donegal’s best tourist attraction?

Oakfield Park in Raphoe. Gerry & Heather Robinson have created an amazing, public space with beautiful gardens, walks and a steam train. They are always adding new designs and offerings including the Oakfest music festival. It’s a must visit.

Do you prefer Donegal summers or Donegal winters?

I’d say summers but there was nothing like sleighing down Mongorry hill in Raphoe on a frosty winter’s night.

What would you do on your ideal day out in Donegal?

Catch up with a few old school friends in Letterkenny, bit of storytelling and slagging!

Shay Given – a gentleman who has never forgotten his roots or his Lifford accent!

Jim McGuiness. The masterplan he created to deliver All-Ireland success in 2012 was outstanding. I first met Jim almost 30 years ago when I played in a band called The Lost and we would go on tour to Glenties! The week before the 2012 All Ireland final I sent Jim a text to say if Donegal were to win the All Ireland then The Lost would reform. They did and so did The Lost!!

Friels of Raphoe. Home from home!

I dream about getting the train to Donegal!

“Would you catch yourself on…”

In my business I never talk about challenges, I talk about opportunities. Beyond Brexit I think Donegal has the potential to be a tech hub for the country. Offering better work life balance and cost of living for companies.

Do you have a favourite local band?

If you had a million euro to improve something in Donegal what would it be?

Is there anything about Donegal that you are very proud of?

There are many things. If I was to pick one it would be the people. I think Donegal people have a great outlook on life, passionate about their county and don’t take themselves too seriously!

Would you like to take part in the My Donegal interview series? Just send us an email on info@donegaldaily.com