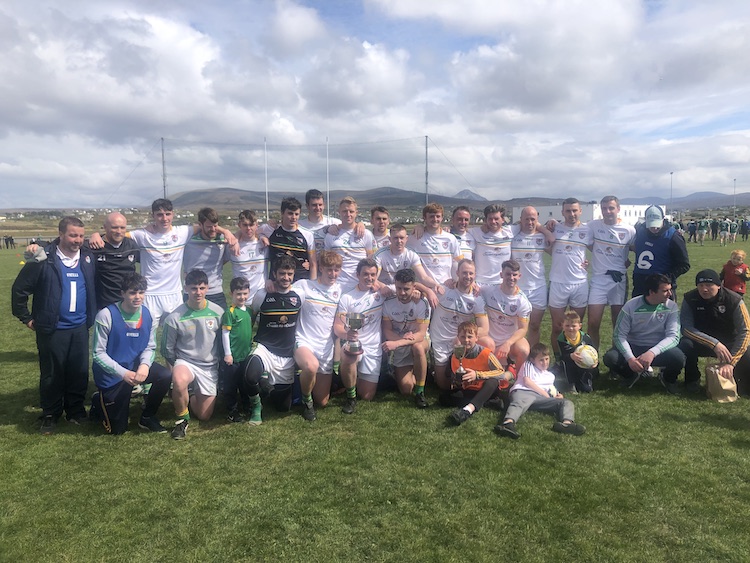 Goals in the first half by Allen Pasoma and Keelan McGroddy powered Na Dúnaibh to an 11-point victory over Béal Átha’n Ghaorthaidh in the final.

Béal Atha’n Ghaorthaidh got in for a goal after just seven minutes as Ian Ó Coinceannáin fired in from close range, but Na Dúnaibh were in command soon after.

Connor turned provider for the opening Na Dúnaibh goal on 13 minutes, playing the ball across goal for Allen Pasoma to palm home.

Last year, Pasoma netted a dramatic late goal to give Na Dúnaibh victory in this competition on home soil. Pasoma bagged the golden goal against Gaeil Fhánada 12 months ago and netted here to swing the pendulum.

Roberts, hit two points, either end of a splendid Connor brace, one of which saw the deadly forward spin onto his left foot to score, to open up a nine-point lead.

Eight minutes for the end, Na Dúnaibh were denied a third goal when Connor struck the post as he side-stepped the keeper after taking a pass from Roberts.

Substitutes Danny McBride and Shea Coyle stretched the lead when he drilled over and Béal Átha’n Ghaorthaidh – who scored just once in the second half – finished with 13 men as Liam Ó Coinceannain and Caoimhin Ó Loinsigh were sent off.

In the final minute, Kevin Doherty was denied by the ‘keeper after a soccer-style dribble, but Na Dúnaibh had the title already long since sealed.