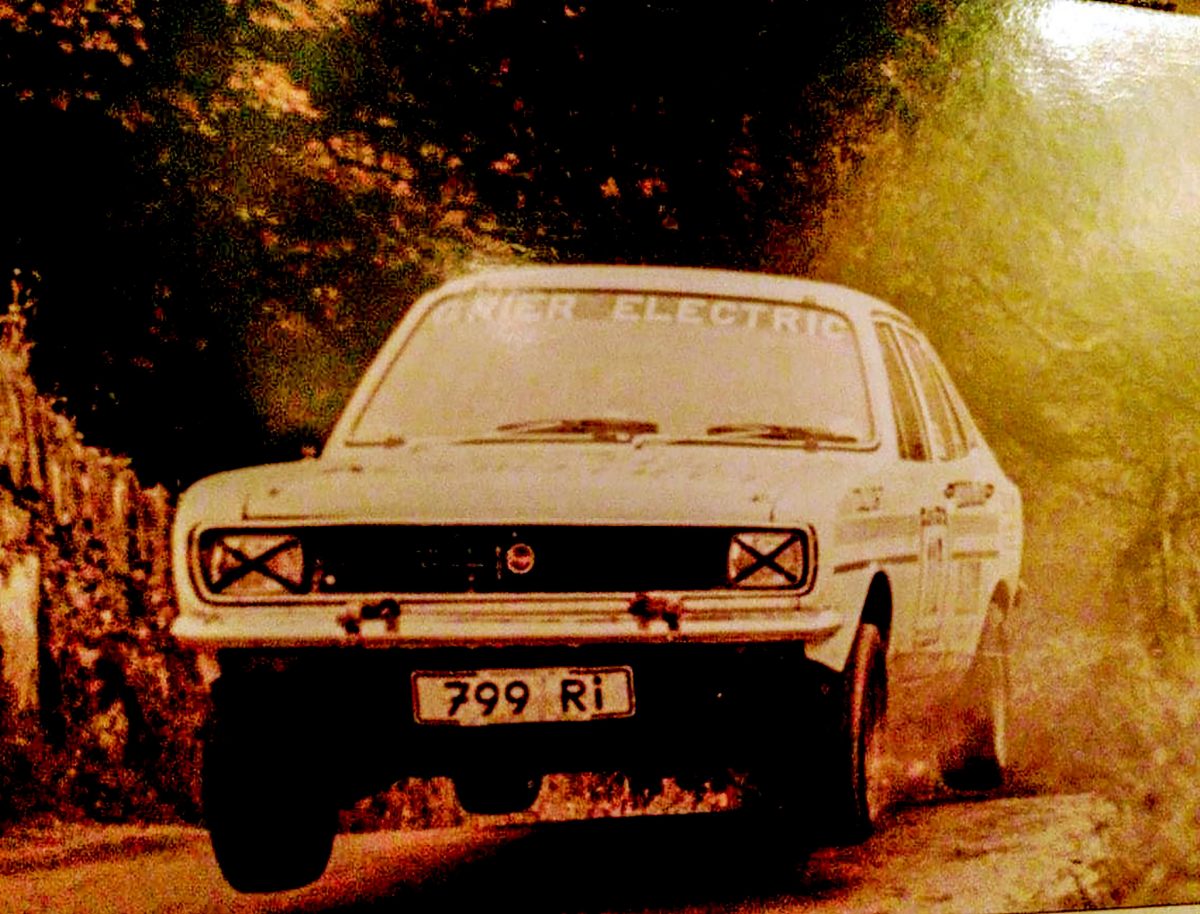 Magic tree air fresheners, old spice aftershave, the whiff of Brylcreem from my father on a Sunday morning.

Pioneer radios and supper tickets for Bella’s nightclub in the Golden Grill.

All memories of touring around when I first started to drive.

You will always remember your first car, the first one you got on the road, especially if it was a car you grew up with.

It also can spark the memories recalling other things other than driving that were in your life at that time.

The transformation of growing up, from sitting in as a passenger daydreaming of the day you drive the car on the road by yourself for the first time.

My father owned an old Hillman Avenger. He bought it second-hand from the late JJ Reid. It was yellow with a black vinyl roof.

A photo out our very young motoring columnist Brian Mc Daid with his father’s old Hillman Avenger in the background.
Picture by the Late Fred McDaid.

They were quite trendy in Letterkenny back then because the Hillman Avenger also made a good club man rally car.

Our car was four years old when we bought it with a 1974 Donegal registration, WIH 211.

The late Eamon Harvey’s latest rally car back then was also a Hillman Avenger, a green one, two doors with a 1973 Donegal registration of UIH 131.

While I was getting on the road complete with my ‘L’ plate front and rear back then two young up and coming local lads were teaming up to build their own rally car from a bare shell up.

It came to Donegal with a Dublin number plate from 1970, 799 RI was a four-door Avenger. All them years ago we didn’t know it but we were watching history in the making.

Looking on in the Church Lane to see if the lights were on late at Caddye’s garage and find any excuse in to see the white rally car taking shape.

A four-door family car transforming from a bare white shell to a rally car in a tin shed on the church lane in Letterkenny.

Back of the field

Them young hopefuls received an entry seeded at 112 on the road, then started the 1979 Donegal Rally on a Friday morning, and over the weekend, passing nearly everybody to finish 100 places up in 12th overall on Sunday evening at the finish ramp and first in their class.

The local boys, and now heroes, were on their very first Donegal Rally.

Over the following decades between them, they went on to win the Donegal Rally no less than six times outright in their separate career paths.

That young Letterkenny crew were of course driver James Cullen and his navigator Rory Kennedy.

With a car prepared by Danny Caddye and Sons, they proved what could be achieved with a little bit of belief and a huge amount of talent.

“And make no mistake about it,” as the late Danny Caddye would say.

Winding the clock on to the present day and while trying to restore some old rally photos this week, I came across a picture of a Donegal registered Hillman Avenger VIH 330 rally car that I had never seen before.

My nose was out of joint because I thought I knew all the Avenger rally cars in Donegal back in the 70s and 80’s as they were passed from driver to driver, but this was the first time I had ever seen this one.

The driver was the late Derek Mc Mahon, he is pictured in it on ‘The Tour of Britain’. I’m guessing it was a 1600GT version by the half vinyl roof, proudly promoting Mc Mahon Bros, Letterkenny on its back quarter panels complete with bog standard steel wheels.

The late Derek and Anne McMahon pictured with one of their sons Arthur. Photo Brian McDaid.

Derek rallied many cars over the years all were well known from Stilettos, Renault Gordni, BMW, RS2000, Series 7 Avengers and Sunbeams all well known in the rally circles but this Series 6 version has mystified a lot even some of the mechanics that worked and prepared his car over the years.

After spending the bank holiday Monday this week trying to find out anything about this car, I felt a bit better because no one else seemed to know about this car either.

Derek may have proudly registered the car in his native Donegal, a county “Big D” as he affectionally called it and was very proud to be from.

If we drew a blank this week in trying to find out the history on this ‘Tour of Britain’ classic Avenger, I hit the jackpot with a chance conversation with Arthur McMahon, a son of the late Derek McMahon, when I showed him a picture of our old Hillman Avenger parked up at the back of our house.

My brother Nelius stood at the wheel with a head full of curly hair and my father, Fred, also known as ‘Big Fred’ alongside our dog, Rover, giving him a paw.

Our old family car in the 70’s a Hillman Avenger, which started out life at the top prize in the Letterkenny Golf Club Prize, which was won by Anne Mc Mahon in 1974. Photo Brian McDaid

Looking at the faded photo and spotting the number plate Arthur asked was the car yellow with a black vinyl roof.

I was to find out that even my fathers old Hillman Avenger was also a winner in its day.

WIH 211 came out of Mc Mahon Bros brand new and was transported to the Golf Club in Letterkenny as the top sponsored top prize in the Barnhill Golf Club Members draw in 1974.

A rare glimpse of this Donegal’s registered Avenger competing on the Tour of Britain with Derek Mc Mahon behind the wheel.

Arthur remembers the car so well because it was his mother the late Ann McMahon who landed home with it after her name was drawn out of the hat in the clubhouse draw and she was the winner of the car.

So, what ended up as our run about family car, and the car that I so fondly started on the road in, was also the family runabout in the McMahon family in the years before it made it way to the McDaids.

NCT and other tests suspended during Covid-19