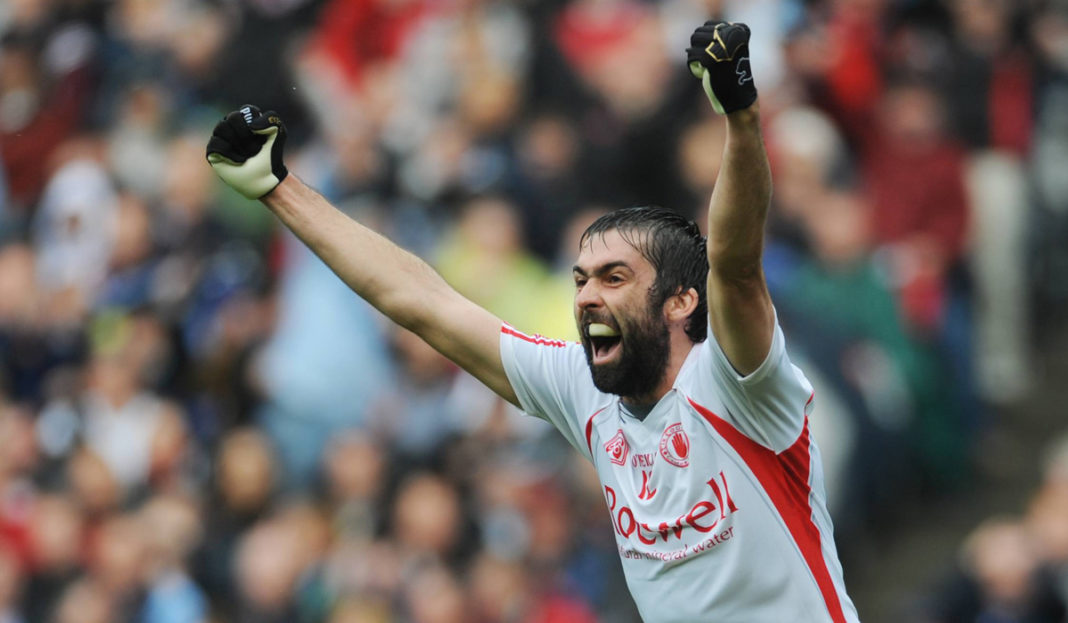 Joe McMahon Exclusive: ‘There was a sort of Galatasary feeling in Ballybofey’

MICKEY HARTE WAS different in 2016.

Tyrone, after enjoying a duopoly in the province with Armagh since the late 1990s, were starved since 2010. Donegal took over, beating them in four of the five Championships before 2016.

The pendulum had swung from Tyrone, but in 2016 they snatched it right from under Donegal’s noses in Clones.

They came from three points down to secure the title through a pair of points by Peter Harte and Kieran McGeary.

It was Joe McMahon’s final afternoon in an Ulster Championship dressing room. By the time the 2017 version rolled around, the Omagh man had retired from inter-county football.

Their dressing room in St Tiernach’s Park was just like the good old days again.

“The elation in the changing rooms and the celebrations afterwards, there was just this emotion,” McMahon says.

“There had been dominance from Donegal and they had all this success; up there, just like we had been. That day, it was total obsession from the squad to achieve what we set out to do. All the frustrations had come through and we toppled Donegal.

“That day was a great confidence boost for young lads coming into the squad who had never beaten Donegal. It was huge pressure off the shoulders.

Mickey had us so well drilled. Before the game, he’d talk to the different lines of the field about the expectation. He posed questions in terms of what Donegal would be thinking, some questions about different scenarios. It was a case of ‘we have met this before, we know how to address it’.

“It wasn’t normal for Mickey to raise his voice, but in recent times he has become more emotional and vocal. He’d raise the voice a bit more to rally the troops. Fellas respond to that.”

McMahon believes the hard days against Donegal from 2011-2015 schooled Harte’s new pupils to the sometimes dark ways of Ulster’s theatre.

Their battles with Donegal certainly added an edge.

“It was just so physical,” McMahon says.

“There was a total win to win. Donegal worked so hard and then you had Tyrone itching so bad to get back to the top table. Results might not have gone for us, but those days paved the way.”

Donegal have the Anglo-Celt on the line tomorrow in an Ulster semi-final in Cavan, with Tyrone looking to continue their recent dominance over Donegal, having won the last three Championship meetings.

McMahon will watch from a perch in the Breffni Park press box and knows the old urges will still be there.

“Without a doubt, players miss that when they return. I don’t miss what’s needed to get out there, but I miss being out there. That feeling of running out for Tyrone, in front of the Tyrone fans, the total emotion of representing the county.

“When there’s a wee exchange on the pitch now, I’d go a wee inch forward and just want to be out there. I was lucky to experience all of that.” 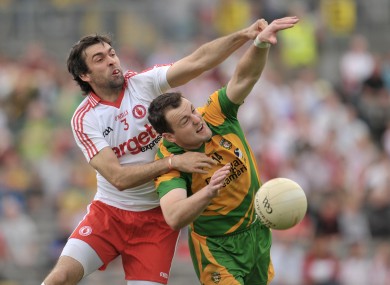 BY HIS own admission, McMahon was ‘naive’ in 2004. He’d just joined the ranks of a Tyrone squad still dizzy from winning the county’s first All-Ireland the previous September.

Tyrone were, in many ways, ripe for the picking, in spite of wins over Derry and Fermanagh, when they met Donegal in Clones and felt the wrath of Colm McFadden’s left foot in an Ulster semi-final. They still had Sam, but the Anglo Celt was snatched from their grasp by Donegal.

McMahon scored his first Championship point that afternoon, but it was a forgettable hour for the Red Hands.

“I didn’t think too much about it. I didn’t have as much baggage as others. Tyrone were riding the crest of a wave as All-Ireland champions and those boys were my heroes. All of a sudden, there I am, lining out alongside them.

“I was sort of in my own wee bubble. That day was an introduction to what the rivalry would be like.

“Donegal have really developed from then, though. They were the party boys back then, but McGuinness just brought them a totally different attitude and a want to work.”

In 2007, Donegal entered on the crest of a wave. Brian McIver guided Tir Chonaill to a Division One title in the spring and they managed to topple Armagh via a dramatic late goal by Kevin Cassidy.

Donegal were sitting ducks when they headed for Clones and were pummelled by Tyrone.

Four years later, though, it was a very different Donegal and the rivalry took a new meaning.

The margins of Donegal’s wins in the Ulster semi-finals of 2011 and 2012 were as thin as a cigarette paper. Tyrone were in danger of running away with it in 2011, but Donegal managed to hang onto the tails and 2012 is remembered for Paul Durcan’s wonder save to deny Martin Penrose. 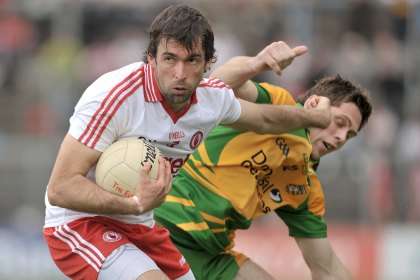 “The big difference in Donegal…as a Tyrone player, you didn’t fear them in a sense that you knew their mentality, their attitude, their mental strength wasn’t there before 2011,” McMahon says.

“There’s no doubt, 2011 was a turning point. McGuinness touches on that in the book he wrote, about the obsession they had with Tyrone, The obsession paid off. Tyrone were in control in 2011 and Donegal probably thought: ‘Here we go again’. But they had a mindset, a belief and a quality at that stage. That day was a massive day for Donegal. They didn’t fear Tyrone.

“That period was very intense for the rivalry between Donegal and Tyrone. Tyrone were probably coming to an end from the success that we had. Donegal were the new kids on the block.

“These games were always small margins and there’s an element of luck to it too. In a way, you make your own luck and when chances present themselves you just have to take them. Even look at us back in 2008, Dessie Dolan missing by inches on the outside of the post we’d have been gone or (Conor) Mortimer, in the (All-Ireland) quarter-final, blasting the ball over the bar, those are little things that go for any team during a campaign.”

Tyrone were drummed into Donegal by McGuinness.

Rory Kavanagh recalls in his book, ‘Winning’: ‘It was Tyrone, not Armagh, who sat centre stage in Jim McGuinness’ mind from the very beginning. Mickey Harte was Jim McGuinness’ No.1 target…It was all Tyrone, Tyrone … Tyrone! At times, it seemed they were the only team he was interested in talking about…Beating Tyrone will; define us, he told us. Or losing to Tyrone will leave us nowhere, he told us.’

It was, as McMahon puts it, an ‘obsession’. 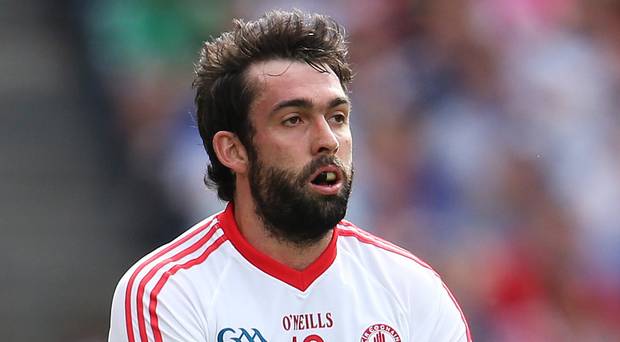 Tyrone, as Donegal had done for a decade beforehand, were now watching enviously as Donegal reached the summit. Ulster was won in 2011 and Sam Maguire captured in 2012.

The obsession had turned. Tyrone, by now, were obsessed with knocking Donegal off their perch.

McMahon says: “That’s fair to say. Donegal were up there and were the team everyone looked to beat. It was just a complete role reversal. The obsession was there.

“I remember us going to Ballybofey to play them and I have an image in my head of someone standing at the door of a house pointing out the back as if we were headed for the back door. That stuff was always there in the border towns. You felt that at the time.”

McMahon was sent off in a preliminary round game in 2013, when Donegal – as the defending All-Ireland champions – defeated the Red Hands in a hostile contest.

He says: “The build-up was feisty and there was a lot of frustrations. Part of your job as player is to control the emotions and use it to get the right result. I was disappointed that day because I felt we had a big chance to win it. It was a frustration about my own performance, our performance.”

It was a day remembered for Niall Morgan’s free-taking. The Tyrone goalkeeper was berated by Donegal’s supporters at The Town End and would rue the cupped-ear taunt after scoring an early point. The afternoon lengthened for Morgan and Tyrone with a series of wides.

“Maybe management should have had a plan B as it was unfair every time he walked up. Maybe they should have changed the kicker,” muses McMahon.

“That affected Niall. We knew the quality he possessed, but it was a difficult situation, Donegal supporters were chipping away and chanting at him. That was a distraction, but as a team-mate you’d be trying to do what you can to allow him hit the free.

“There was a sort of Galatasary feeling heading to Ballybofey. The small changing rooms, warm weather, a stuffy feeling and the smell of Deep Heat. You’d run out there, close to the crowd and there’d be a nice exchange of words with people in the crowd telling you just what they felt about you.

“That was just Ulster football and the emotions attached. You’re aware of that but you know getting that stuff from the crowd you must be doing something right.” 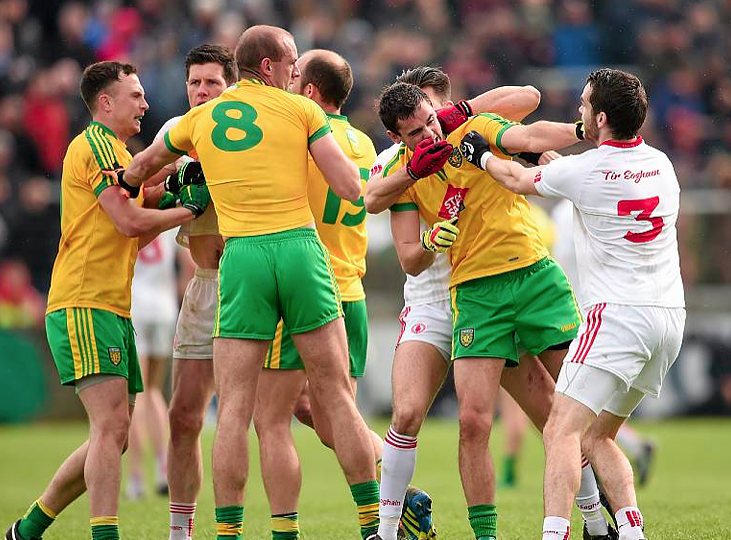 Tempers fray between Donegal and Tyrone players in a Championship clash

AS THE teams prepare for the latest instalment of their rivalry – tomorrow’s Ulster semi-final at Breffni Park will be their eighth Championship clash in nine years – McMahon believes last year’s win for Tyrone in a Super 8 meeting in Ballybofey was seismic.

Tyrone hadn’t won a Championship game in Ballybofey for 45 years and Donegal were unbeaten at the venue in League and Championship football since 2010.

Tyrone, though, powered home in the final quarter.

“Last year winning there was a huge weight off Tyrone’s shoulders,” McMahon says.

“Some players, because of where they live or whatever, might be a wee bit more bitter. They’d listen to stuff growing up, or they’d have their own history. But you always want to go and prove a point.

“It’s almost become like a club rivalry, it seems very parochial. ‘We’re just as good as them and we have to prove that’ sort of a thing. I think the pressure is off Tyrone this weekend, but Donegal are sitting quietly and that’s a danger for me.”

His heart tells him that Tyrone will have ‘too much’, but the head delivers a reminder.

“I imagine Donegal’s game plan will be a sharp, fast start, keep themselves in the game for as long as they can. They did that in 2011 and 2012…”