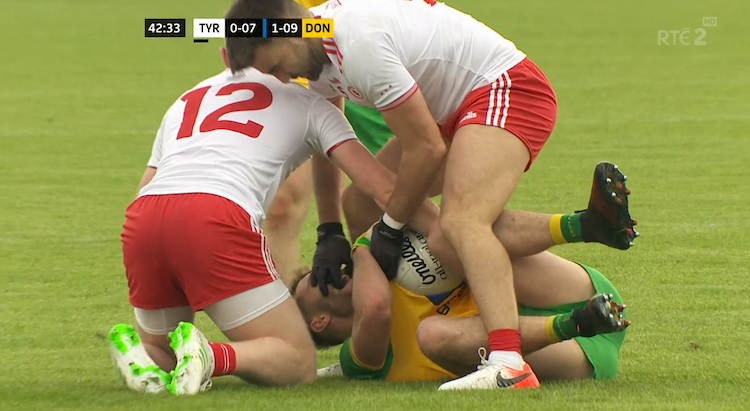 TYRONE DEFENDER Tiernan McCann could find himself in hot water after an incident in today’s semi-final.

During the second half of the game – which Donegal won 1-16 to 0-15 – Donegal defender Stephen McMenamin won a free from McCann.

However with McMenamin grounded and swamped by Tyrone players, footage appeared to show McCann making contact with the face of the Donegal defender.

The Central Competitions Controls Committee (CCCC) can apply retrospective punishment if the referee has missed it during the course of the game. McCann was later withdrawn injured.

“Stephen is made of stern stuff, but if that was the case it’s not acceptable,” said Donegal manager Declan Bonner, who did not see the indecent at the time.

The Tyrone manager, Mickey Harte, when asked afterwards in his press conference, said: “I wasn’t looking through the lens of a TV, as you might well imagine. I was standing on the sideline as I always do. If something happens a distance away from me, I cannot see every detail that goes on.

“You obviously had a better view of that than I have, because I know nothing about it.”

Brainless and dangerous from Tiernan McCann there on Stephen McMenamin. #GAA pic.twitter.com/U4JICnNh6l