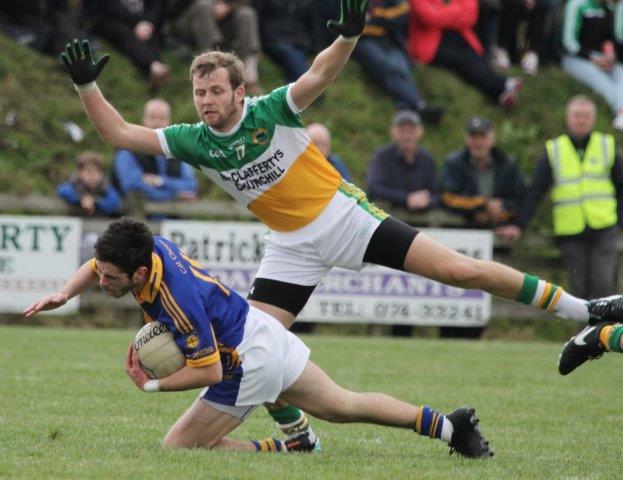 Glenswilly play off familiar script for slender win at Milford

A FAMILIAR script was enacted as Glenswilly overcame Milford in a game of inches.

By Chris McNulty at Moyle Park.

As they have done so often when the margins are so thin, Glenswilly held sway by the skins of their teeth.

The match-winning score, arched over by midfielder Leon Kelly (pictured) in the 52nd minute, was the first time the Glen men were in front.

Once Glenswilly had the lead, they were determined not to let it slip.

The usually-flawless Cathal McGettigan was narrowly wide with two frees in the tense closing chapter and Ciaran Bonner skewed off target down the other end.

In the third minute of added time, with the game’s final play, Milford set about salvaging something, but when Ruairi Crawford’s interception dispossessed Christopher Barrett at the vital moment, Glenswilly had won for the third time in four.

Milford led 0-7 to 0-5 at the break and McGettigan pushed the margin out to three points with a free early in the second half.

Barrett landed two points with McGettigan (free) and Gary Merritt, with a monster point from distance, also on the mark as Milford led 0-4 to 0-1 after 16 minutes.

Glenswilly, with Michael Murphy and Neil Gallagher watching from the sidelines, did well to stay in touch by the changeover, with Bonner, Kelly and Caoimhinn Marley on the mark.

Ryan Diver, in the final minute of the half, brought Glenswilly to within a point with a superb score from the left flank.

McGettigan might have sank a goal when he spun around to shoot after taking an arrowed pass from TJ Evesson into his chest, but the Milford attacker settled for his point. Barrett made it 0-7 to 0-5 at the interval.

Both sides were shorn several key performers. Milford have watched Kane Barrett head for America in recent weeks while Luke Barrett was suspended here and the names of Gavin Grier, Pauric Curley, Ryan McMahon, Ronan Docherty and Paddy Peoples could be inked on the absent list, too.

Marley, with a fine 45-metre free and Oisin Crawford, brought Glenswilly back, but Darragh Black zoomed over to maintain a two-point cushion for Danny O’Donnell’s hosts.

That, however, would be Milford’s last score with the hosts left to rue several missed chances in the last 22 minutes.

Substitute Donnacha Gallagher brought Glenswilly onto level terms with a tidy free from a testing angle on the left-hand side and it was a kick that added real energy to the Glenswilly challenge.

Glenswilly might have got a goal nine minutes from the end but Milford, somehow, survived. Conor Coll blocked on the goal-line from Brian Farrelly’s palmed effort and Kelly’s follow-up managed to stay out.

Kelly riffled Glenswilly in front and they stayed there to the close for a valuable win that moves them into fifth in the standings.

These teams are slated to meet again next weekend and it will be another day of significance in the battle for Division One survival.