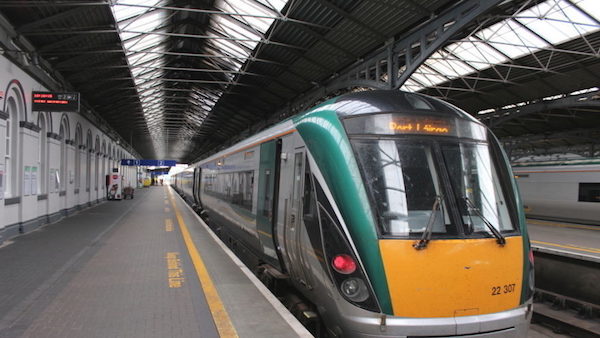 A Donegal doctor helped a mum to deliver her baby on board a commuter train travelling from Galway to Dublin today.

The 3.05pm service from Galway to Heuston was approaching Kildare just before 5pm when the woman went into labour and required medical assistance.

Staff on board the train located a nurse who went to the woman’s assistance while ambulance services were also called and boarded the train within 20 minutes at Kildare.

The baby was delivered by Alan Devine, a GP from Letterkenny who is living and working in Galway.

Alan, from Golf Course Road, was on board the train as he was travelling to Dublin for a conference.

He told the Irish Times “I’m a GP so this wasn’t really my field at all. I would have done some training in managing deliveries when I was training to become a GP, but I haven’t been next or near that in about five years, let alone anything outside a hospital.

“I was watching Chernobyl on my iPad and I could hear some commotion going on, but I didn’t really know what it was. We were stopped for about 10 minutes at Kildare when I paused my iPad to hear what was going on.

“The woman sitting opposite me then asked if was a doctor, and I said I was. She told me there was a woman giving birth further up the train, so I looked up and could see a security guy in hi-vis between carriages holding a towel up to the door.

“I could hear moaning so I asked the woman to mind my stuff and I ran up. The poor woman was there in the throes of labour. She was a young woman on her own.

“By the time I got there, there was a lovely Irish woman named Ellen on the phone to the ambulance crew. There was an Irish nurse helping her, and there was an American tourist in her seventies holding her hand and coaching her through the labour.”

Mr Devine said he informed the security staff member that he was a doctor, and he was allowed access to assist with the birth.

“Naturally enough there was no medical equipment or gloves or anything, so the young girl who was working on the catering car got me some gloves from the trolley,” he said.

“I then started to help with the delivery. Within about a half hour we had a successful delivery which we were all very relieved about, nobody more so than the mother. She was terrified, and part of our job was reassuring her.

“The baby came out, and within a minute or two the ambulance staff was there. The baby needed a bit of help getting its breathing going and getting a good colour. It felt like about 10 minutes but I’d say it was more like 30 seconds when it let out a cry.

“Honestly, we all nearly cried as well because there was a lot of tension and stress. Things calmed down then. We initially looked into getting a helicopter to take her to the Coombe but there just wasn’t one available to we went off into the traffic.

“I’d say the next couple of days will be important for mother and baby but thankfully everything worked out.”

Irish Rail said the train was delayed at Kildare for a total of 80 minutes before continuing its journey to Heuston. “We wish mother and daughter well,” said a spokesman.