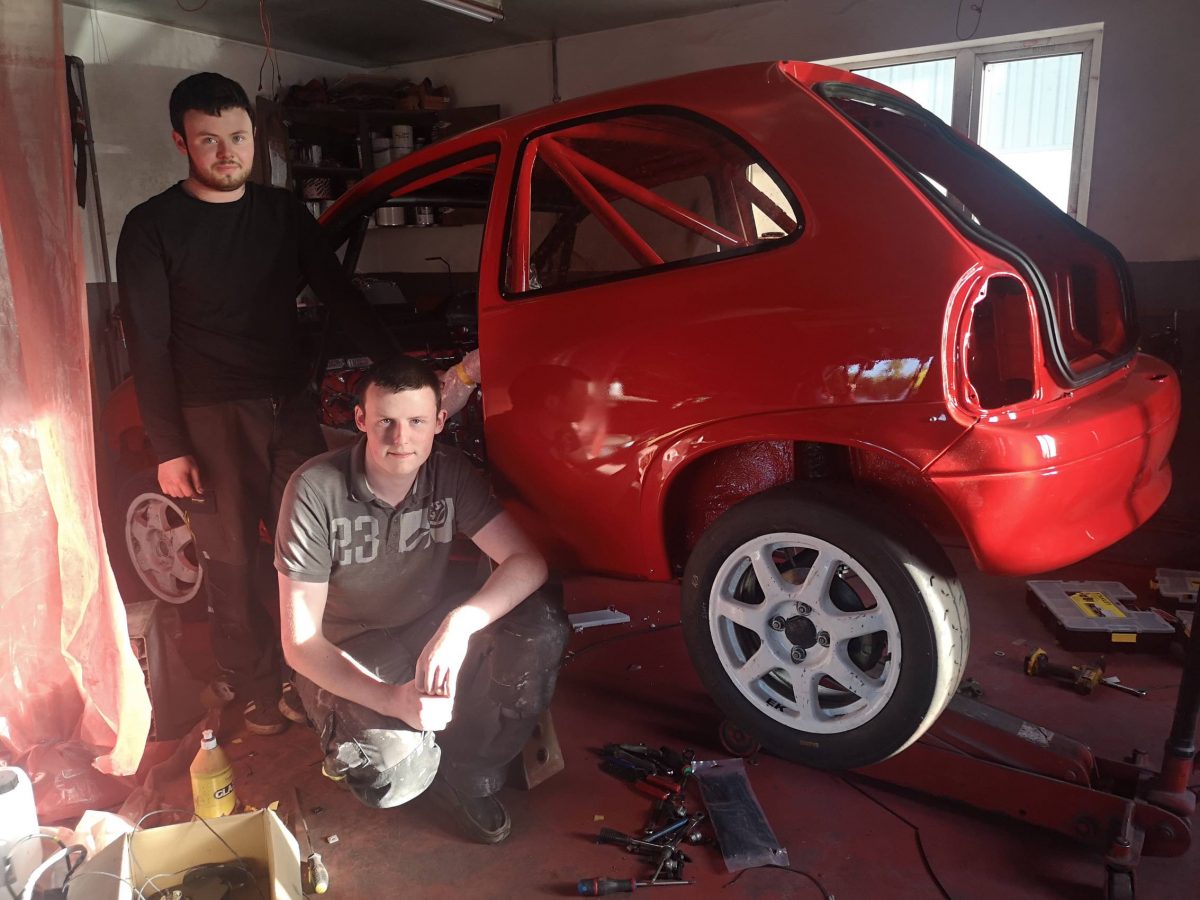 This week Brian McDaid looks at two very different journeys mapped out in the coming weeks in a preview of a difference in the run-up to the Donegal International Rally.

Kelly’s Heroes was a blockbuster film back when it was released in 1970.

Household names like Clint Eastwood, Telly Savalas and Donald Sutherland to name but a few made their names on the silver screen.

Far from Hollywood, the feature film that is the Donegal Rally produces heroes and stars every year as the three-day feature film unwinds over the June weekend.

Our focus is on the journey of just two of the rally cars that will make up the packed out entry this year for 2019.

One of the cars will start the rally as Number 1 at the very front of the field on Friday morning and one will start near the very back in the Juniors Rally section on the very last day of the rally on Sunday morning.

These two cars are built with the same amount of passion and effort and coincidentally both cars are being prepared on the outskirts of Letterkenny within eight-tenths of a mile of each other in two very different workshops where the magic is created to produce two very different cars for this year’s Donegal Rally.

Part and parcel of both of these journeys in preparing rally cars is a late night fish supper from Mr. Chippy, or a dinner box, or even a big four from the Four Lanterns and you covered in engine oil and a few skinned knuckles thrown in for good measure before heading back into a garage to try and beat the clock to get a car ready for scrutiny on Thursday evening before the Donegal Rally.

It doesn’t matter if the door plate says car No. 1, 103 or even J19, the feeling of participation and preparation is exactly the same.

The ink on the entry has just dried and the rally packs printed locally in Brownes Printers and are in the shops complete with maps of the route for the weekend.

But even as late as this week it’s the same story with so many competitors as they make a massive charge to the line in order to get their cars ready.

Parts are still arriving by whatever means necessary to get cars over the line to pass scrutiny come Thursday before the rally.

Fiona Kelly solicitors, P&M Fibre optics Ltd, Kevin Kelly Tiling, Nails by Niamh and Wasson’s Garage are still only a list of sponsors on Eoin Kelly’s phone which he will text to his graphic man in the coming days.

Eoin Kelly will not see his first stage on the 2019 Donegal to the final day of this year’s event to Sunday morning on Fanad Head (the start time for the juniors rally) but as you are reading this the young Letterkenny man has a massive uphill battle to get his Opel Corsa ready for scrutiny on Thursday evening next.

Eoin’s Corsa sits high on axle stands in a garage behind the family home outside Letterkenny and hasn’t a single window in it at the moment.

The engine is sitting on the floor of another shed awaiting the return of the gearbox which has just undergone a rebuild.

Eoin Kelly is a young apprentice mechanic who built his own rally car from scratch which took a couple of years of saving money and sourcing parts until he had the Corsa ready for last year’s Donegal.

He only got a few stages on Sunday morning before a fault in the petrol pump forced the young Letterkenny man to retire.

“Big off” on the Harvest

On 2018 harvest rally Eoin put the car off in a big way and over the winter months, he has pretty much rebuilt the car from scratch again.

When we visited Eoin this week his Corsa has just received a complete respray, inside and out which was done in a make-shift spray booth in the corner of the garage.

Eoin has put in a lot of very late nights in on his Opel Corsa and feels that he is making better progress rebuilding his rally car than the first time he built it because he knows exactly where everything goes the second time around.

Running in the Junior Class, Eoin’s rally will not start to Sunday morning but the young mechanic will be flat out all weekend with his brother Brian, an apprentice plumber by trade, as they will be servicing their father Kevin’s Mk 2 Escort seeded at 103 and their Uncle Andrews Mk 2 who is still on the reserve list as we go to press.

I second that motion

Meanwhile, not far up the road the three times winner of the Donegal International the second Kelly, now Cllr. Manus Kelly’s car is also coming into shape for the Donegal Rally at the Philip Case workshop.

The R5 Hyundai was built in the motorsport division of the Korean car giant based in Germany and is run by Philip Case Rally Sport based in Letterkenny.

Applegreen is his principal sponsor and not forgetting locals like Cathal Sheridan from E&M Embroidery who have been supporting Manus from the start.

Yesterday morning, Wednesday, we also got a chance to have a look at Manus Kelly’s Hyundai taking shape.

It was also sitting upon a set of axle stands in the centre of the garage floor in the busy workshop and it also has a 1600cc engine the very same cubic capacity as Eoin’s 1600 Opel Corsa when he gets it into the car.

But that’s where the similarities end.

Rory Kennedy’s name is still on the back window as navigator where he stepped in for Donal Barrett on a few events on the run-up to the Donegal.

As the three times winner of the Donegal Rally Manus “Mandy” Kelly puts in as much “seat time” as possible to adapt to both the R5 and learning to steer from the left-hand side of the car.

Manus is also sitting in a new seat and is one of the many winners in Donegal in May when he was elected to the Donegal County Council but come Friday both Eoin Kelly, seeded in the juniors, and Manus Kelly, running at number one on the road. will be on different stages as they star in the blockbuster that is the Donegal Rally.

On a final note, the Donegal Rally would not be the event it is if business people didn’t put their hand into their pocket to support both the running of the Donegal and the sponsorship of competitors in the rally.

The event is more than a sport. It is a product which everyone wants to be a part of.

I have included an old photo this week of one of the men that has supported the rally down through the years, right from the start, but sadly is no longer with us.

That was the late Andy Hegarty who through his motorcar business supported the Donegal since it started.

He is pictured with one of the greatest drivers (in my eyes anyway) that ever came to Donegal, Ari Vatenan.

The Late Andy Hegarty pictured with Ari Vatenan in 1978 who he sponsored in his Ford RS1800. they are pictured beside the old Sub 4 factory near the Ballyriane Hotel.

Andy sponsored Ari on both his visits to Donegal.

Famously the Flying Finn won the rally in 1978 in a Ford Escort but also had an earlier run in Donegal in An Opel Ascona a few years earlier, which Andy also sponsored when he was the local Opel Dealer.

Young Eoin Kelly, in our feature this week, is the grandson of the late Andy Hegarty and is the third generation of the Hegarty family involved in the Donegal Rally.

It’s sad to hear of the passing of the Late Johnny Murray this week. A part of the car industry in Donegal all his life, from the days he worked in Mc Clean and Mc Laughlin motors in Letterkenny as a storeman, to setting up his own business Murray Motors in Manorcunningham.

Johnny Murray Main Opel Dealer for the North East Donegal pictured at the Vintage and Classic Motor Show at the LYIT in Letterkenny. a few years ago. Photo Brian McDaid.

My sympathy is extended to his family at this difficult time