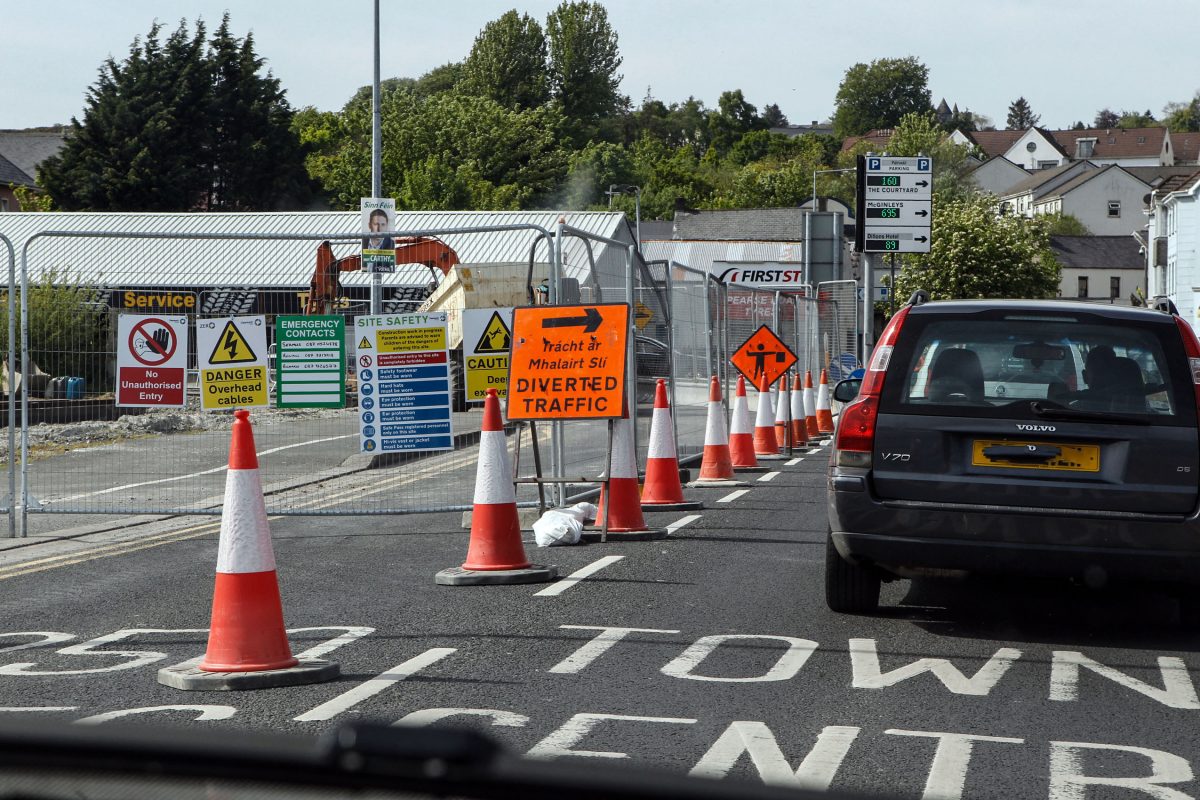 Letterkenny businesses call for roadworks to stop as jobs threatened

Businesses in Letterkenny have called on Irish Water to suspend works at the Lower Main Street as a number of job losses are threatened because of the disruption being caused.

In a letter released through the Letterkenny Chamber, businesses say an alternative to the current works must be found.

Businesses say they met with Irish Water and Donegal County Council officials to allay their fears but nothing was nothing to ease their worries.

In recent weeks traffic in the area has been so bad that people have been voting with their feet and staying away from some parts of the town.

Some businesses report a downturn of up to 30% in overall trade.

A spokesman for the businesses said “Quite simply, the current works programme is unacceptable.”

The following is the letter released this morning by the Letterkenny Chamber explaining the position of businesses.

On 3rd December 2018, local businesses, supported by the Letterkenny Chamber of Commerce, engaged in discussions with Irish Water, Donegal County Council and the project contractor Cleantech.

At that meeting, we sought clarification on the works and the schedule for same.
On 21st February 2019, some 11 weeks prior to commencement of works, we made the following proposals to Irish Water:

1. To put a left turn in place at the junction affected by the works. This would negate the need for a diversion and avoid additional congestion on Pearse road and Main Street;

2. To ensure that the traffic management plan included full daytime cover on all necessary junctions on Pearse road, Main Street, and in the Old Town area and have provision to deal with unexpected spikes in traffic;

3. To employ a works plan that allows for additional teams to carry out works in the evenings and at the weekends to shorten the length of the 21 week project considerably;

4. To carry out the daytime works on the dual carriageway from the Dry Arch roundabout to the Polestar roundabout at a different time to these works.

In response, Irish Water stated that:
• They would explore our proposals;
• That a left turn was not an option;
• That the Dry Arch to Polestar works would not have a significant impact on Letterkenny;
• That they would take immediate action if any issues arose during the works.

We again met with the contract parties on 11th April 2019 and we were disheartened to learn that no formal review of our proposals was carried out.

We reiterated our concerns and told Irish Water and Donegal County Council that the current plan will cause severe traffic issues and lead to significant damage to business and loss of jobs. We again met on 2nd May 2019 and again asked them to take our proposals on board and implement them.

It became obvious, however, after one week that the works were having a significant impact on Letterkenny.

• We immediately contacted Irish Water and Donegal County Council to voice our concerns;

• We then issued a letter on 24th May 2019 calling for the works to cease until an appropriate solution is found;

• We contacted An Garda Síochana immediately and they offered to assist with traffic management and we are thankful for their ongoing commitment to provide necessary resources.

At a meeting with Irish Water and Donegal County Council on Thursday 6th June, some two weeks after our letter request, we were informed that:

• They were considering our proposals and would revert within a few days. This is despite the fact that we made the proposals 16 weeks prior to this meeting;

• They believe traffic flow has improved – we have told them that this is because traffic numbers have decreased significantly.
We note that as of today, 12th June 2019, neither Irish Water nor Donegal County Council have proposed any solutions and they have refused to suspend the works until one if found. At present:

• Businesses, across Letterkenny, are suffering losses of up to 30%;

• Businesses cannot sustain this level of loss and job losses are likely unless a solution is found;

• We have proposed the only real solution to the issue and it has been ignored to date.

We are once again calling on Irish Water, Donegal County Council and Cleantech to agree to:

• Suspend the works with immediate effect;

• Take the time needed to find an appropriate solution.

The spokesman added “Finally, we would like to remind everyone that Letterkenny is open for business and your support is crucial. At peak times, allow a little extra time and please continue to support local business and jobs.”