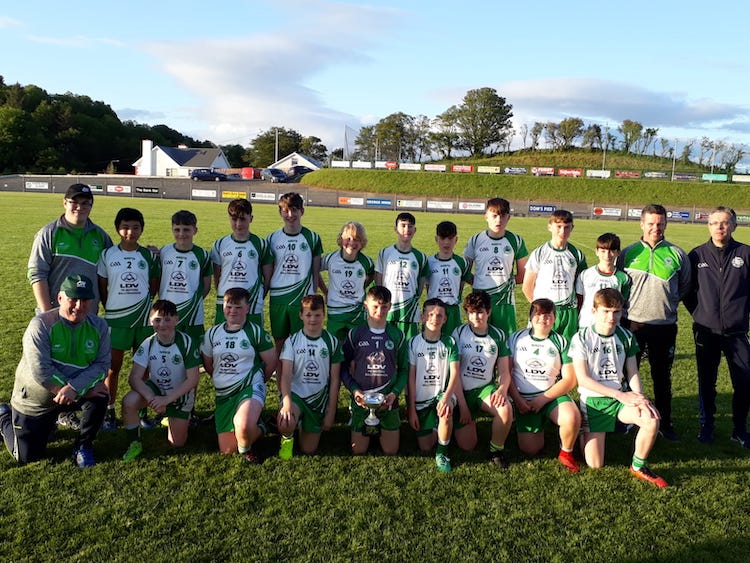 Aodh Ruadh came out on top in the U14 county championship hurling final played at the Four Masters grounds in Donegal Town.

This much anticipated final  between the county Feile champions Aodh Ruadh and a St Eunans team that had defeated the League Champions, Carndonagh, to reach the final was played in perfect hurling conditions.

Early points from Eunans put them ahead but Aodh Ruadh hit back with three goals in a devastating ten minute period.

However, St Eunans rallied with their defence battling hard.

Two points followed from Eunans but crucially the Aodh Ruadh defence stopped a close in shot from PJ Gallagher right on the break to leave them with an eight point lead.

Aided by a breeze in the second half Aodh Ruadh hit quick fire goals but St Eunans  never quit and continued to seek a way back into the match.

The Aodh Ruadh ‘keeper was in fine form and made a series of great saves ensuring a comfortable win for the Ernesiders who finished with a brace of fine points despite strong pressure from the St Eunans defense.

Aodh Ruadh captain Tommy Winters was presented with the Cup as the Ernesiders headed home U14 County Champions for the second year in a row.

Aodh Ruadh too strong for St Eunan’s in U14 hurling final was last modified: June 14th, 2019 by Chris McNulty