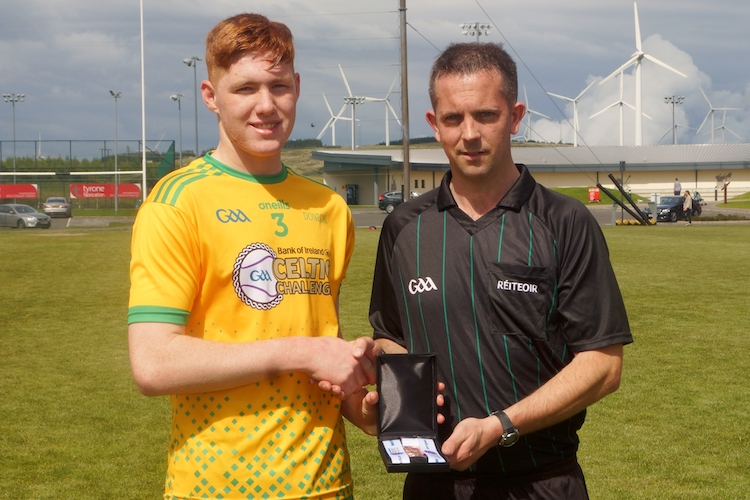 The Donegal under-17 Hurlers overcame Louth to reach the Celtic Challenge semi-final.

Louth opened with a goal from a long distance shot.

However, Donegal quickly got to the pace of the game and began to dominate reeling off six points in a row.

Picture: Referee Barry Winters presented Ciaran McLaughlin with his second man of the match award in a row.

Louth responded with two pointed frees, however the Donegal forwards were creating goal chances only to be denied by the excellent Louth keeper. Conor Gartland, Dean and Ruairi Campbell stretched the Donegal lead with excellent points. Donegal were threatening to pull away however,

Louth dug deep reeling off a goal and two points to hit the lead.  In an end-to-end-game, Donegal worked the Sliotar to Ruairi Campbell who drove it to the back of the net. Both team then exchanged points. Donegal led 1-10 to 2-5 at the break.

The second half opened with Louth driving forward rocking Donegal with two goals in quick succession.

Louth’s confidence soared as Donegal struggled to get a grip in midfield. Points from Conor Gartland and the Forde brothers settled Donegal nerves but Louth replied with a point.

Then Donegal fitness and hunger began to tell with goals from each of the Campbells and two points from Conor putting the lads back in the lead again 3-15 to 4-7.

Louth were not beaten and scored three points in a row. The game was becoming a real shootout.

Coming into injury time with more points from each team Louth had no option but to get goals. Twice Louth broke through but great defensive work from backs Ciaran Mc Laughlin and Matthew Noonan among others kept them out.