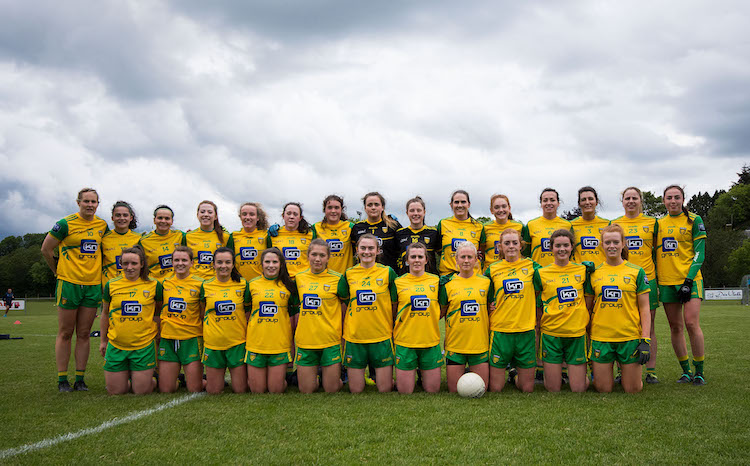 GERALDINE MCLAUGHLIN lit the touchpaper with 14 fabulous points as Donegal ladies booked their place in a third successive Ulster final.

By Chris McNulty in Killyclogher

McLaughlin kicked 11 points from play and landed seven scores in extra time as Donegal got clear of Cavan after an enthralling encounter in Killyclogher.

Donegal had come from five behind at the end of normal time to outscore Cavan 0-12 to 0-3 from the 47th minute to take the win and put them within an hour of a third Ulster title on the spin.

McLaughlin’s 14 points and another eight by Karen Guthrie saw Donegal through, but it was a nervy night for their supporters.

The Termon sharp-shooter kicked five points in a row in the first half of extra time to put Donegal firmly in the driving seat.

Erin Longair had given Cavan the lead in the opening minute of the extra period, but that proved a decisive moment in the game with Sinead O’Sullvan, who powered through the middle to create the chance, electing not to shoot for goal as she bore in on Aoife McColgan.

McLaughlin kicked into gear and powered Donegal clear, but Maxi Curran’s team was down to 14 players with Nicole McLaughlin sent to the sin bin.

The Donegal number six was the seventh player yellow carded by referee Kieran McKeever (Niamh Carr would soon become the eighth) whose decisions drew understandable ire from both camps throughout the evening. Some of the official’s calls bordered on the bizarre and it certainly wasn’t a night to remember for the Armagh man in black.

An inspirational Kate Keaney score – Donegal’s only point from play in the second half – saw Donegal, who came from five down in the last 10 minutes force extra time, get another bite at it.

In normal time, Cavan hit goals either side of half-time through Ciara Finnegan and Aisling Maguire to rock Donegal back on their heels.

Cavan seized control of the tie when, just 30 seconds into the second half, Aisling Sheridan, who won the throw up, was fouled by Karen Guthrie after surging forward. With Guthrie – who scored four first-half points – sent to the sin bin, Maguire smacked the penalty to the Donegal net.

Donegal were down to 13 for a few minuets when Roisin Friel was yellow carded but, with Guthrie still off, Maguire – with 1-5 to her name at the stage – was also sin-binned for a foul on Kate Keaney.

Donna English, with two, and Ciara Finnegan, put Cavan five in front with just 14 minutes remaining, but Donegal hit the final five points of normal time. Cavan might have snatched a win, but Maguire was off cue with a free.

Finnegan’s goal in the 30th minute briefly had the Breffni ahead for the first time, but Amy Boyle-Carr restored parity before half-time.

Donegal had moved 0-8 to 0-4 in front by the 22nd minute, but Cavan hit 1-2, with the dependable Aisling Maguire converting two frees, to announce their arrival back into the contest.

Donegal, who had two early frees by Karen Guthrie, had a couple of goal chances themselves with Elaine Walsh, the Cavan goalkeeper, smartly saving from Geraldine McLaughlin in the 14th minute, while McLaughlin was uncharacteristically casual when a chance presented itself from Katy Herron’s ball in four minutes later.

McLaughlin arrowed over two points in the ninth minute to move Donegal ahead by two points after a moment that left Cavan reeling.

Aisling Sheridan won a kick-out from Donegal ‘keeper McColgan and fired in to Finnegan. Her low prodded attempt came off the post as she and McColgan collided. Referee McKeever shrilled the whistle and the attendance expected a penalty. They were surprised and James Daly, Cavan’s manager, and his counterparts on the sideline were left fuming by the decision to give Donegal a free.

Another brace by McLaughlin opened up a three-point lead and the Termon woman struck again after Aisling Gilsenan pulled a free wide at the pother end to make it a four-point game.

Cavan struck a hammer blow in the final minute of the first half when Finnegan, after good approach work by Sheridan, steadied herself to riffle past McColgan.

Donegal, though, did get a chance to draw level before the interval and Boyle-Carr drilled over from a Guthrie pass to even the sums, 0-9 to 1-6, at the short whistle.

Donegal were without Niamh Hegarty, with the influential Moville woman missing out due to the leg injury sustained in last week’s quarter-final win over Tyrone in Cavan. Hegarty’s place in the forward division was taken by Friel and, in a further change, Niamh Boyle came in for Roisin Rodgers in the Tír Conaill rearguard.

Donegal were in danger of having the game run away from them when they fell five in arrears, but Guthrie arched over a pair of frees on her return to the action to tee up a grandstand final ten minutes.

The drama was only just beginning and Keaney’s brilliant score, eventually, took the game to extra time, where Donegal’s big guns – led by the inspirational McLaughlin – stood up to be counted and they meet Armagh in the June 30 final in Clones.