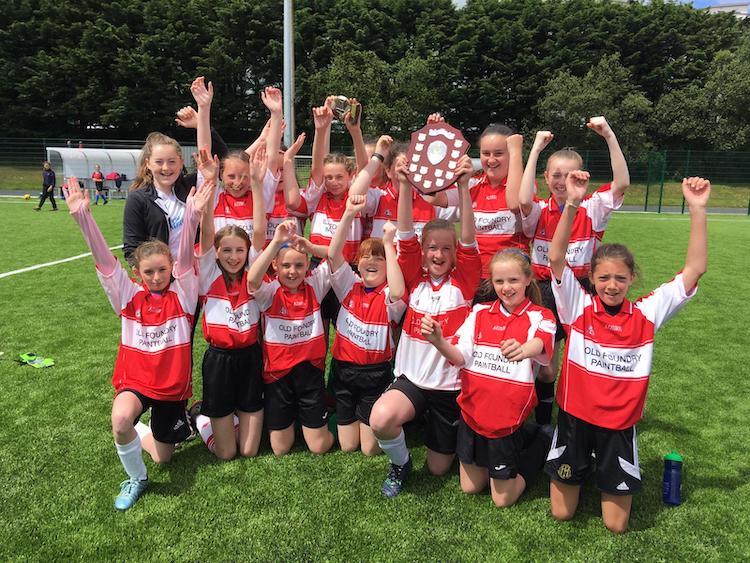 The boys and girls of Woodland NS, SN Fiachra Illistrin, St. Patrick’s Lurgybrack and Gaelscoil Adhamhnáin showed off their talents yesterday at the finals of the County Seat-sponsored Letterkenny Cup for large schools, held on the Community Centre’s new astro.

The girls’ final between St. Patrick’s NS Lurgybrack and Woodland NS served up an entertaining affair.

Chloe Creevy at the heart of the Woodland’s defence had an excellent match for the runners-up.

Brendan McAteer, County Seat, presented the delighted Lurgybrack captain, Megan Patterson with the Letterkenny Cup for 2019 and the Player of the Match award went to Grace Murphy, who was an attacking threat all day.

In a pulsating match, Illistrin led 2-0 with less than fifteen minutes to go with both their goals coming from the sublime Fintan Hassan. Philip MacAoidh, who excelled for the Gaelscoil all day, stroke the back of the net with 10 minutes remaining to set up a hectic finish.

Gaelscoil’s Dualtach MacRuartaigh’s surging runs caused Illistrin problems and it was from one of his attacks that the Gaelscoil won a free kick right in front of goals. Cianán Mac Giolla Chomhaill’s struck the freekick with power to make it 2-2, and ensured that the game would be settled on penalties.

Josh Wade in the Illistrin goal was the hero of the day with two excellent saves in the shootout. He parried the last penalty away from goal and was quickly surrounded by his celebrating teammates.

Main sponsor, Brendan McAteer of County Seat, was in attendance and presented the victorious captain, Fintan Hassan, with the Letterkenny Cup.

The Player of the Match award was presented to Illistrin’s John Antonio Gallagher, who showed great defensive qualities throughout the match.