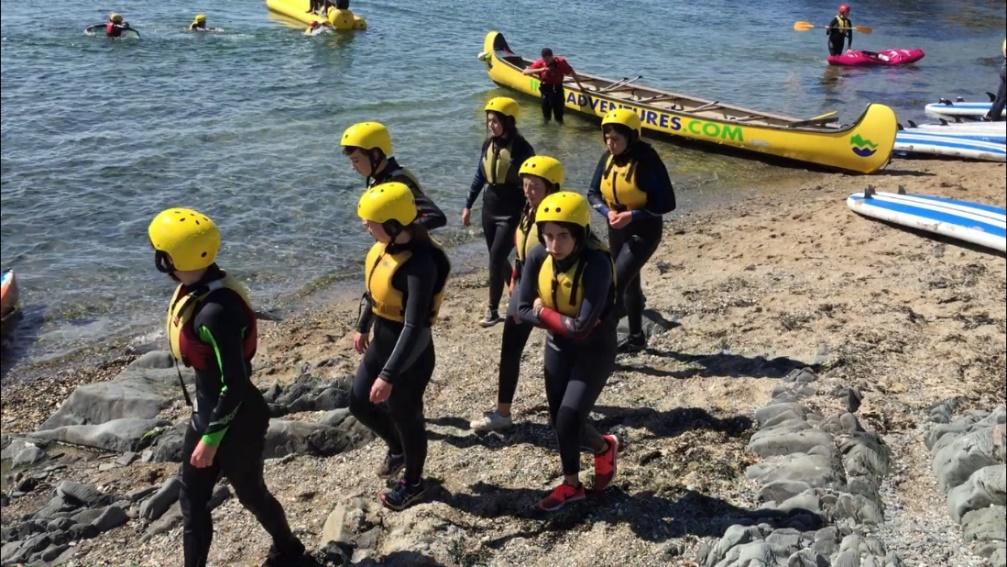 Over 90 young Donegal people have enjoyed taking part in a unique project aimed at understanding diversity, team-building and community relations.

The ‘Every Story Matters Project’ was launched by Donegal County Council back in February. Three groups, from Scoil Mhuire in Buncrana, The Royal and Prior School in Raphoe and the Chance Project run by Inishowen Development Partnership have participated to date. Over 90 young people aged between 14-24 have benefited from learning about subjects such as Conflict resolution, mediation training and understanding diversity.

This exciting initiative is supported by the EU’s PEACE IV Programme and managed by the SEUPB. Match-funding for this project has been provided by the Executive Office in Northern Ireland and the Department of Rural and Community Development in Ireland.

The initial groups having completed 30 hours training with the facilitators all recently came together for three fun filled sessions at the Inish Adventures’ facility in Moville to embark on team building workshops and exercises. In addition to being an action packed few days, many new friendships were made.

According to Katrina Mc Gonigle the Transition Year Co-ordinator at Scoil Mhuire in Buncrana:

‘The programme has been highly beneficial to our students – they learned so much from Stephen and Michael the facilitators, who always made sure the workshops were interactive. In particular our students were really pleased to have met and learned from a Syrian refugee who is now resident and working in Donegal – hearing his story first hand and being able to ask him questions really brought the challenges of refugees’ home to our students in a way that cannot be done by simply reading about it. The students also gained an insight into the Muslim faith which dispelled many preconceived stereotypes they had held.”

Every Story Matters Participants enjoying the team Kayaking in Moville

Kathy-Anne Gibson, the teacher in charge of the Transition Year student group from the Royal and Prior in Raphoe highlighted the engagement the group had with Richard Moore.

“Richard’s story was truly inspirational, having lost his sight as a ten-year-old in tragic circumstances, Richard spoke to our students about living with a disability, forgiveness and the work he continues to do as the founder and director of the Children in Crossfire Charity. He was happy to address all the questions the students had about living with his disability and indeed meeting with, and forgiving, the soldier who fired the shot that blinded him. Every Story Matters project really forced our students to think outside the box, Stephen and Michael challenged the students about how they viewed themselves and other people in a fun and safe environment.”

The programme teaches participants empathy and understanding through participation in workshops, simulation exercises, field trips and interactions with guest speakers. Participants in Donegal are taught to embrace diversity and to gain a greater understanding of the challenges existing in the modern world and how to overcome these challenges.

Gary Duffy the Youth Development Officer with IDP suggested that his group from the Chance Project benefited most from the trip to Derry to visit the Free Derry Museum and the Apprentice Boys Museum.

Local Consultancy practise, Friel Consulting, led by trained mediator Stephen Friel is the lead delivery partner. The team will be delivering workshops during 2019 to 150 young people throughout Donegal aged from 14-24. Spaces still exist for the next round of workshops and interested groups are encouraged to contact Stephen at info@frielconsulting.com