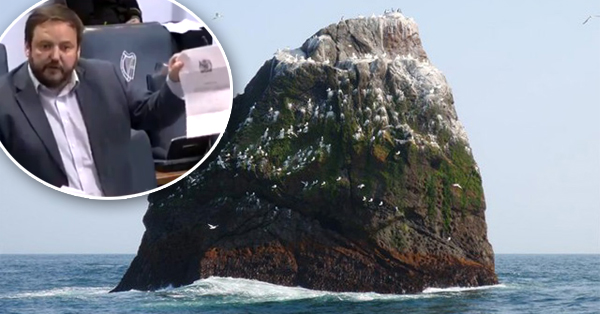 Donegal Senator Pádraig Mac Lochlainn has said that a 2013 agreement between Ireland and the UK on Rockall should be void.

A agreement, co-signed by Ireland at the UK, recognises the exclusive economic zone of the UK. That includes Rockall, the tiny rock which lies some 400km off the coast of Donegal.

Speaking in the Seanad, Senator Mac Lochlainn claimed that the agreement was in contravention of the constitution as it was not brought before the Houses of the Oireachtas.

He said that the Irish government should fight for rights to fish in the waters around Rockall.

“I’m not so brazen as to claim far away territories but we certainly must insist always on the right to everything, the fishing resources or whatever resources that are around Rockall, as a shared resource,” Senator Mac Lochlainn said to Minister for the Marine, Michael Creed.

He asked why Ireland is not uniting with Iceland and Denmark to contest the bilateral agreement to the UN to ensure that Rockall is a shared space.

“My fear is, whatever about the EU Fishery Policy, after Brexit, we’ve got a serious problem on our hands,” Senator Mac Lochlainn said.

The debate was raised more than once this week in the Oireachtas. On Tuesday, Tanaiste Simon Coveney stated that the issue of Rockall did not arise in the 2013 agreement on the exclusive economic zone.  He told Pat the Cope Gallagher TD that sovereignty over uninhabitable rocks such as Rockall is irrelevant for the purposes of establishing boundaries between continental shelves and EEZs of neighbouring states.