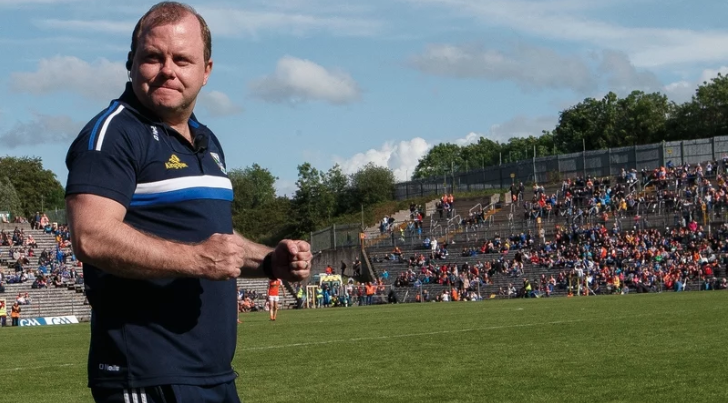 HE HAS already been behind one of the great GAA victories and upsets of all time – and now, Cavan boss Mickey Graham hopes to add Donegal to his list of casualties.

Graham was manager of Mullinalaghta St Columba’s, who won a remarkable Leinster club SFC title and whose voyage only ended with a 2-7 to 0-18 defeat by Dr Crokes.

A half-parish of 440 people in Longford, Mullinalaghta’s was one of the stories of 2018. Indeed, their run to the Leinster final – and beating the great Kilmacud Crokes 1-8 to 1-6 in the final – will go down in the annals as one of the great GAA stories.

Graham, a former Cavan player, who was on the Martin McHugh-managed squad in 1997 that won Ulster, double-jobbed for a time between Mullinalaghta and Cavam/

“It was mentally draining, there is no point saying otherwise,” he says.

“But it would have been a lot worse if you hadn’t anything to show for it.

“The Mullinalaghta story in itself will live with me a long, long time. Because of where they came from and what they achieved, against all the odds.

“It was tough but it was for a few months and I will look back on it in years to come and realise it was only for a short time. Not too many people get to enjoy what I enjoyed at that time and I suppose I have to be grateful for that too.”

Graham allowed Mullinalaghta to be bold and to be brave.

It is a principal he has taken with him to the Cavan job.

He says: “One thing I have learned is that it is a game of football. You can talk about systems and patterns of play. I think players can get lost at times in all this. I am a firm believer in letting lads play it as they see it. Let them express themselves. Have a go. Don’t let them play within their shell as that will only get you so far.

“You have to let lads as footballers go out and express themselves. Sometimes you just have to tell them to go and play it as they see it. When they do that, they grow in confidence themselves because they have the freedom to do it.”

Cavan were relegated to Division Two this spring, but were close in games against Galway (lost by two points), Kerry (three points) and Monaghan (three points).

“Playing Division One was the making of us as a team,” Graham says.

“What we learned in Division One was that we got punished for every mistake we made, whereas the teams have been around the block had enough cuteness to get them through whereas we didn’t and we got punished every time we gave away the ball.

“It was something we knew we needed to work on if we were going to be able to compete because it just wasn’t on.

“While we got relegated, we learned so much. We were creating as many chances as the opposition we were playing against but we weren’t showing it on the scoreboard and it was an area we needed to get right.

“Thankfully in the last couple of games we’ve started to improve on that aspect of our game.”

Graham, a sales rep with Coca Cola by day, admits to his surprise at Cavan’s rise to status of contenders.

A win over their old foes Monaghan gave their Championship a real kick-start and they overcame Armagh via a pulsating draw and an equally absorbing replay.

“You thought it might take you 12 or 18 months before you could see a pattern or where you wanted to go with the players,” Graham says.

“To get to where we are so soon is great, but it’s a credit to the players.

“Sometimes people will tell you it’s the new manager syndrome, others say it’s just new ideas that the players have bought into, but I definitely wouldn’t have seen us getting so far this soon. They’ve really bought into what we wanted them to do and they’ve adapted very quickly.”

Cavan, the county that gave the Ulster Council the Anglo-Celt Cup – sponsored by the newspaper of the same name in the 1920s – are back in the final after an 18-year wait. Donegal, by contrast, are heading into their eighth final of the last nine years.

Graham was one of those men and carries the same sheer believe that his own team-mates did.

“There’s no excuses for not believing,” he says.

“I firmly believe we can win, but a lot of things will have to go right for us. We have to play the best game of our careers, we have to get the rub of the green which every team needs and we’ve got it in a couple of games this year and we need to get it again, and you hope that Donegal maybe have an off day.

“Why would you sacrifice so much time, effort, so much of your personal life and get to the stage where you’ve earned it and not believe you can go on and follow through with it. That’s the big thing. You have to believe, and you have to dream.

Sitting at home isn’t something that he’s done too much of lately.