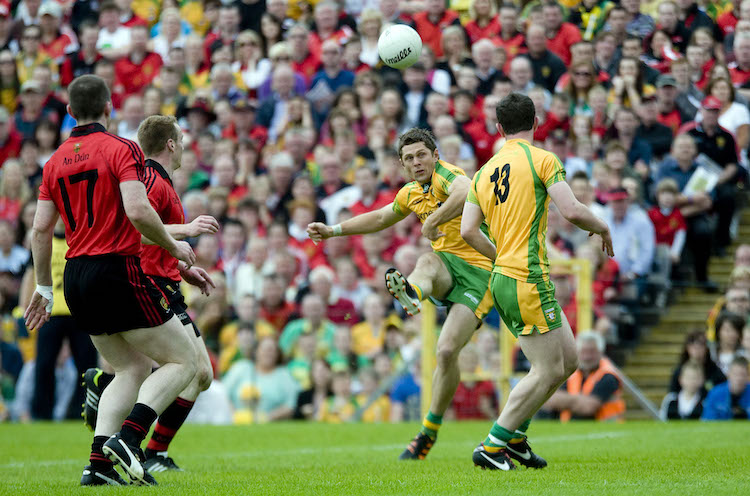 How Ryan Bradley was spellbound and changed by McGuinness prophecy

AT FIRST, Ryan Bradley didn’t know what to think.

It was October 2010 and even the weather conditions outside were making the Buncrana man wonder if he’d made the right call.

Picture: Ryan Bradley opens the scoring for Donegal with a well-taken point during the 2012 Ulster final. Picture by Evan Logan

He hadn’t played in the Championship with Donegal in 2009 or 2010, but Jim McGuinness was keen to have him on board.

Bradley had been in and out of the Donegal squad a couple of times, but decided to give McGuinness the benefit of a face-to-face sitting.

They met in McGuinness’s home in Creeslough before a challenge game between the Donegal senior and under-21 teams at The Bridge.

McGuinness handed him a nine-week programme.

‘Ryan, I need you down at this weight’.

Bradley looked at the sheet in front of him. He knew himself what lay ahead.

It would’ve been easy to slide the A4 page across the table.

Bradley, though, found himself gripped somehow.

McGuinenss’s words were stern and to the point.

Bradley watched from afar as Donegal meekly bowed out of the 2010 Championship, hammered out of Crossmaglen’s gates by Armagh in an infamous qualifier. Nine points the margin on the scoreboard. The gaps in the minds seemed wider still.

“At times you listened to him and thought: ‘You’re off your head’, but you still believed him,” Bradley says now, almost nine years on.

“He sucked you in. I never saw anyone who didn’t believe what he was saying.

“I saw what Jim was going with the under-21s and thought there was a chance of doing something. This was a team that was hammered by Armagh and this man was saying they’d win Ulster before a panel was even selected.” 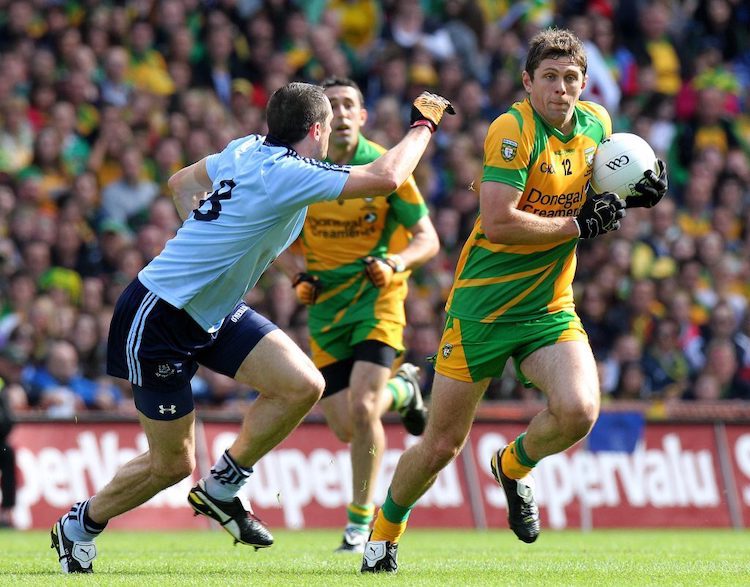 Bradley played in the game and so began the nine-week programme.

“It was tough, but it was all for my own fitness. I felt so much better, health-wise, from it.

“I had to reach a target. If I did that programme and got the target, it was proof that we weren’t wasting each other’s time.”

“I had never experienced anything like it. He kept on saying that we were going to win Ulster. That we would win the All-Ireland.”

After winning a first Ulster crown in 19 years, Donegal knocked on the door in 2011 only to be sent from the threshold by Dublin in the semi-finals.

“We should have beaten Dublin in the All-Ireland semi-final in 2011,” Bradley says.

“Maybe we weren’t ready for Kerry, but that Dublin game proved that if we stuck to the plan, we could do anything. If we’d kept to the game plan against Dublin, we’d have beaten them.”

Bradley was now a cornerstone in the team and a year later would carry Sam Maguire back into Buncrana.

Just three years earlier, he was lying upon a mattress on a Boston floor as a former Donegal player and scarcely believing the road he was about to travel.

He says: “After we beat Tyrone again in 2012, you could see the believe and confidence through the whole team. At that stage, there were probably ten of the players who had played against Armagh in 2010.

“That was three years of my life that I’ll never regret. You wonder at times where the time went. It’s such a short window and hopefully the young players now realise that. I don’t miss the hard work, the training, that sort of stuff, but the hard work was worth every inch of it.”

The Donegal team went to Dubai after winning the All-Ireland. Bradley and his wife, Claire (Sheerin), a first cousin of Donegal captain Michael Murphy) headed to Qatar for a break of their own and were bitten. 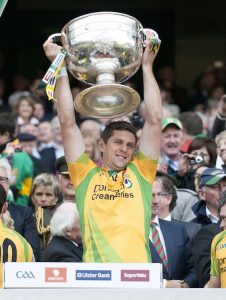 After the close of the 2013 Championship, they upped sticks and made home in the Middle East.

“The last game I played for Donegal was the tanking by Mayo (the 4-17 to 1-10 All-Ireland quarter-final loss),” Bradley says.

“We didn’t realise that we were so tired in 2013. We still trained away like mad, but the bodies and the legs were just gone.”

The following year, Donegal – with McGuinness having changed his backroom team that winter – hit back to win Ulster and reach the All-Ireland final, where they were pipped by Kerry.

He says: “Jim was talking to me in 2014 about coming back for the Championship and trying to get back at it. He offered to help me find work. Paul McGonigle was in the backroom team at the time and he was onto me too. I thought long and hard about it and I was close. But I had made my mind up and work was going well. I was happy with the decision I made.

“I watched every game from the edge of my seat, but there was never a regret.

“It wasn’t a surprise that the boys came back to win in 2014. They got a rest, they were sharper and they were fitter.”

He’s been away for six years now but in the next fortnight the Bradleys and their two young children will return home to Inishowen for good.

Ryan Bradley in action for Donegal

Bradley, who turns 34 in August, will get back into the Buncrana colours again.

“I’ve played nothing in about two and a half years,” he says.

“I’ll probably get back in and play with Buncrana.

“I’ve not played much here at all. It’s only a one-day job here, where you’d fly away into those different countries and play group stage games.”

Travel for a game involved a flight to Oman, Bahrain or Dubai for instance. A run from Buncrana to Glencolmcille seemed a doddle in comparison.

“Anyway, the 9-a-side doesn’t really suit me and that’s all they play here,” he says.

He’s seen a new culture and made a good life in Qatar, but ‘everything is done now’ so it’s back home.

He watches Donegal with the same passion as always.

“I’m usually calm, but I was jumping off the couch and bouncing when they beat Tyrone,” he says.

“Those boys are winners. Those boys are leaders. Frank McGlynn is just a great football brain, Neil McGee is a warrior…Paddy McGrath, Patrick McBrearty, Leo McLoone, Michael Murphy…Michael, I’ve never seen a leader like him. Never.

“Michael took the captaincy so young. I know when I was there, everyone – from the youngest to the oldest – just had so much respect for him. Everyone followed him, but he leads by example. It’s how he conducts himself, how he speaks to people, what he does, he just earns the respect back.”

Like most, Bradley worried, after 2017, when Donegal suffered heavy defeats at the hands of Tyrone and Galway, that the bubble had burst.

“You couldn’t blame people for thinking that there was a big rebuilding job for Declan Bonner,” he says. “To keep it fresh and come back to win Ulster is some going.

“Maybe inexperience cost them in the Super 8s against Tyrone las year. I thought Donegal had that match won. I didn’t see that Tyrone performance coming. Donegal were so much hungrier and sharper. I should know not to doubt them!”

It’s weeks like this that make Bradley’s mind go back to his own heady days.

“The buzz on the pitch after winning the semi-final…that’s what I miss. It’s great to be around an environment like that. It’s tough, but when you’re training that good and working that hard, you get such a buzz.

“There’d be no better place to be this week, going in and preparing for an Ulster final.

It takes him right back.

To 2010 and that October Sunday, the rain pelting off McGuinness’s kitchen window, when he decided the man across the table was worth believing in.