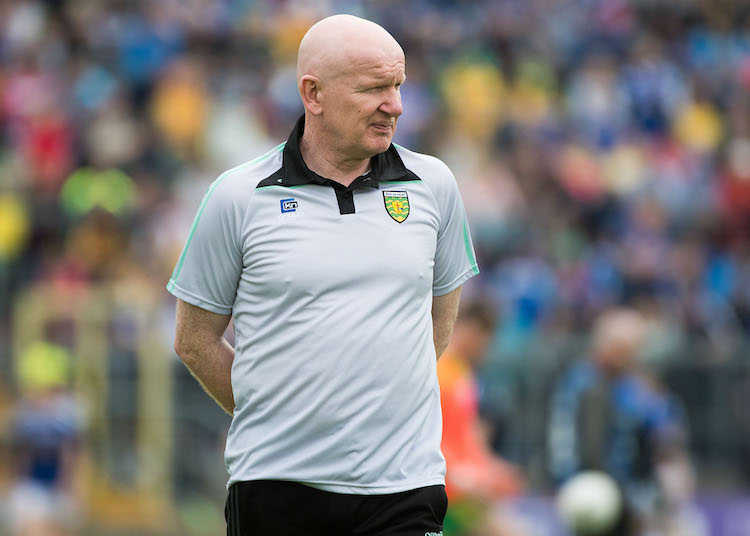 BEFORE 2011, when a 19-year Championship famine was ended, Donegal had won the Ulster SFC just five times.

They waited since 1992 to add another crown to the handful won in the 123 years of the competition.

Including 2011, Donegal have added another five in the last nine years. Going back to the Ulster U21Michael Murphy has now lifted nine pieces of silverware as a Donegal captain.

“This group deserve everything they get,” Declan Bonner said after his team retained the Anglo Celt thanks to a 1-24 to 2-16 win over Cavan in yesterday’s Ulster final in Clones.

“I’m delighted. We don’t do back-to-backs too often in Donegal.

“Everyone puts the shoulder to the wheel and this is the reward for everyone working hard.”

On the Monday after Donegal had put Tyrone to the sword in the Ulster semi-final, Bonner gathered his troops again. Legend has it, that training session was among their toughest yet.

Manager was keen to send a message to his players.

Bonner said: “Once we got the Tyrone game, we brought them in on the Monday and sat them down to get ready for this. Ulster medals aren’t handed out easily. We had five training sessions in the last two weeks and each one was better than the last.”

Bonner has lifted Donegal from the lows of 2017, when heavy beatings by Tyrone and Galway had many fearing that the great run was at a close, to being kings of Ulster in successful years.

The Na Rossa man isn’t one to shirk big calls and the inclusion of Odhrán McFadden-Ferry for his Donegal debut was vindicated as the Gaoth Dobhair man turned in a top-class display.

Bonner said: “He did extremely well for a first game in a Donegal jersey. He did a brilliant job on Martin Reilly, one of their key players. He was brilliant.  It didn’t faze him. He was ready for it.

“It wasn’t a decision that we took lightly. He hasn’t played any senior football, but you could see that he was ready and you have to trust players.

“Odhrán McFadden Ferry: that was his first taste of senior football today and we have real trust in those players. I’ve said it before that it is a small squad – only 29 players – and any one of those players could have come on and done a job. Five times in 10 years is brilliant.”

Although Cavan scored 2-11 in the second-half, Donegal had sped into a commanding 0-13 to 0-5 lead by the break and there was never a moment when an upset appeared even remotely likely.

“Ah, we were top class in the first half,’ Bonner said.

“There were scores coming from all over the pitch and some excellent passages of football. We were dominating the kick-outs and we got scores with the likes of Eoghan Ban (Gallagher) and Ryan (McHugh) coming from deep, Hughie McFadden as well.

“We had a couple of goal opportunities in the first half, which we didn’t take. Paddy McGrath was unfortunate with one of them.”

One of Bonner’s long-time prodigies, Jamie Brennan, scored 1-4, including a smashing goal in the 58th minute, to continue his superb summer.

Bonner said: “Jamie Brennan has been doing that all year. He’s stepped up to the plate over the last two years since I’ve been involved. I’ve had Jamie since he was under-15, under-16. I know the quality within the guy. Delighted for Jamie, delighted for the whole group.”