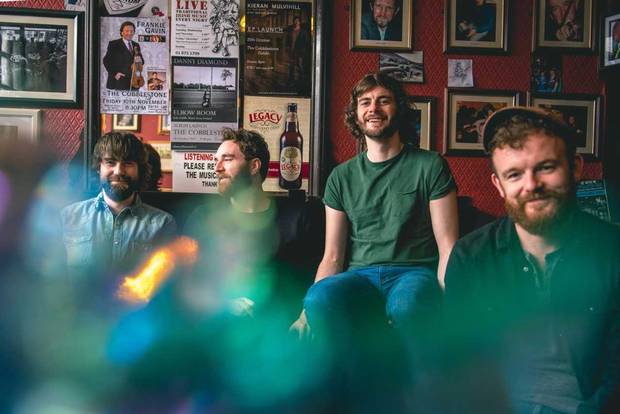 First homecoming gig for In Their Thousands this Friday

Hit Donegal band In Their Thousands are about to play their first home gig since the release of their debut album to rave reviews last month.

Following two dates in Dublin and Belfast, In Their Thousands now return to Donegal to play the Regional Cultural Centre in Letterkenny on Friday, June 28.

Downings brothers Aidan and Declan McClafferty, their cousin Ruairí Friel from Fanad, and Malin friend Martin Smyth have been receiving widespread attention since the release of Acrasia and its preceding singles, the title track Acrasia and Sit and Breathe.

Forged in a shed in Glen, the album was recorded at Attica Recording Studio in Termon with well-known producer Tommy McLaughlin who has worked with artists such as Villagers, Foy Vance, Duke Special and is currently touring in the US with Derry artists SOAK.

Eamon Sweeney (The Irish Times) said of the band’s new release: “Donegal’s In Their Thousands create a well-crafted blend of stadium rock that is surprisingly effective, without resorting to the bloodless or dull cliches that plague the genre.”

Having already released four EPs since 2011, Acrasia is the culmination of many years of hard grafting for the four Donegal musicians and hopefully the beginning of great things to come.

The band has won over crowds across Ireland, the UK and mainland Europe since first recording and performing under name of In Their Thousands and writing harmony-driven anthems.

Support on the night will come from Derry and Donegal tag team Waldorf & Cannon who create a unique alternative sound heavily laden with stirring harmonies and catchy hooks often sharing and swapping lead vocals during a single song.

Tickets for In Their Thousands at the Regional Cultural Centre, Letterkenny at 8pm on Friday, June 28, are now on sale from www.intheirthousands.com, book early to avoid disappointment.