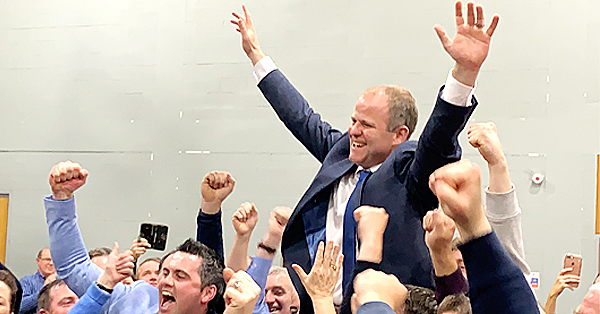 Donegal County Council’s Fianna Fáil party whip, Cllr Ciaran Brogan, has described his late party colleague, Cllr Manus Kelly, as a special person who had a bright future ahead of him in political life.

“In his 41 years Manus made a huge contribution to so many groups, clubs and organisations in the locality. He made his mark at Glenswilly GAA Club, in the world of motorsport and in business where he was hugely successful. He was extremely generous by nature and was so giving of his time and energy to a number of charitable organisations,” Cllr Brogan said.

“As an individual he had a genuine warmth and a unique ability to light up any room he entered. I have no doubt that he would have made a huge contribution in a political career he was just starting out in and really enjoying. While his time as an elected representative was short, he displayed all the good traits and qualities needed to represent the people with dignity and purpose.”

“Manus had worked really hard and so many things we starting to come good for him. Our thoughts are with his wife, Bernie, his five children Annie, Mandy, Charlie, Conan and baby Bella, his parents Donal and Jacquline, sisters Breigeen, Kelda, Ciara and Shannagh, brothers Donal, Caolan, Teigharan and Leon, nieces and nephews, his extended family and his motorsport team. They have all lost a person who was so dear to them. May he rest in peace.”