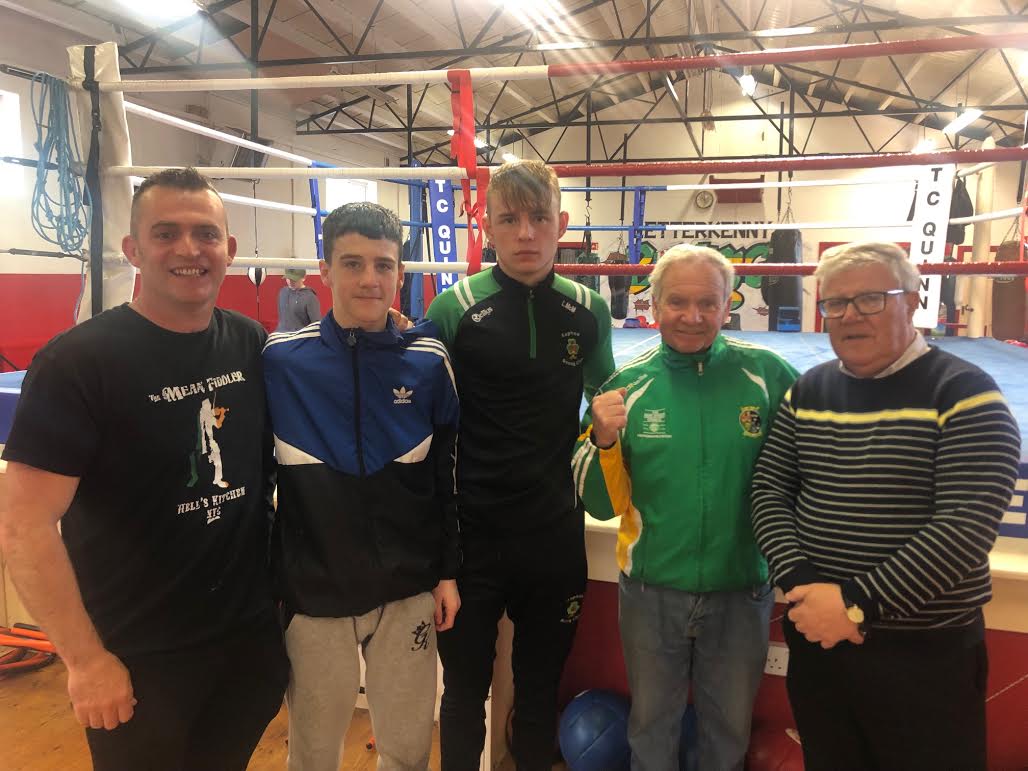 He loved watching Mike Tyson, but it was ‘The War’ that gripped the young Keaveney.

Hagler was cut in the third round but when he landed a biscuits right hand followed by a pair of uppercuts, the fight was over.

The bloodied image remains one of the more iconic ever in the sport.

‘Eight minutes of Mayhem,’ was how Boxing News called it.

“It was only three rounds, but it was just a war,” Keaveney, a coach now at Raphoe ABC says.

“I loved boxing myself. I loved, believe it or not, the feeling of getting hit and making sure it didn’t happen again. ‘What am I going to do to change that?’

“I started boxing young. I boxed from I was eight years of age and I was 17 when I stopped. I had a lot of fights.”

His love of boxing was honed by his father, the late Ollie Keaveney, the former medical registrar of the Donegal Boxing Board.

Keaveney heads for Boston today as one of five coaches with a Donegal select that faces a Boston Boxing Academy team tomorrow night at the CoreBox Centre.

“It’s great to get that reward,” Keaveney says.

“It’s nice to get recognised. It’s not about us, it’s about the boxer.

He was no mean operator himself in the squared circle.

In 1992 he boxed for Ireland against Scotland, losing out to a familiar opponent, Kemp, in Dublin.

He says: “had beaten him four times before. I froze in the first round or two. I came alive in the last round, but I lost the fight.”

He hit the crossbar in two Irish finals – “I didn’t get the decision, but that’s how boxing works sometimes,” he says now – but has around 15 titles to his name, including three Ulster crowns at 54kgs.

He turned his hand to coaching and, after a period at Finn Valley ABC, he joined Raphoe ABC – the club for whom he had boxed – five years ago.

He works with head coach Gary McCullagh, honing the skills of the likes of European bronze medalist Leah Gallen.

He says: “In boxing, every day is a learning day. Anyone who thinks they know it all is mental.

“I’m young as a coach and to watch and see what’s happening is so important. You have to take everything in.

“Gary is great to be involved in at Raphoe and you couldn’t get better than Peter O’Donnell.

“Then there’s my old coach, Tommy Stewart, it’s great to be involved with Raphoe. The club is coming on well and we have good kids putting in the effort. There is no hiding place there.

“We’re going well and we just want to keep driving and getting better. I love it. It’s a great club and a great place.”

He acknowledges the support of his wife Aleana and their children: “The support from home is vital. I have a young family and they’re very supportive.

“If I didn’t have that support, I wouldn’t be able to do what I’m doing. I go away a lot with boxing and my wife is very understanding. It’s great.”

He has been Stateside to see Jason Quigley in action and, back in the day, fought in America himself.

This week, he’ll remind the young Donegal boxers of the chance and the opportunity they have.

“A lot of stuff happened and I got to see a lot of the world because of boxing,” says Keaveney, who boxed in Connecticut, Boston and New York.

“That was a great experience for a young fella to get at that stage.

“Hopefully these young boxers embrace this now. It’s not everyone can say that they go abroad to represent Donegal. Boxing is Ireland’s most successful Olympic sport so I’d like to think these guys appreciate it.”