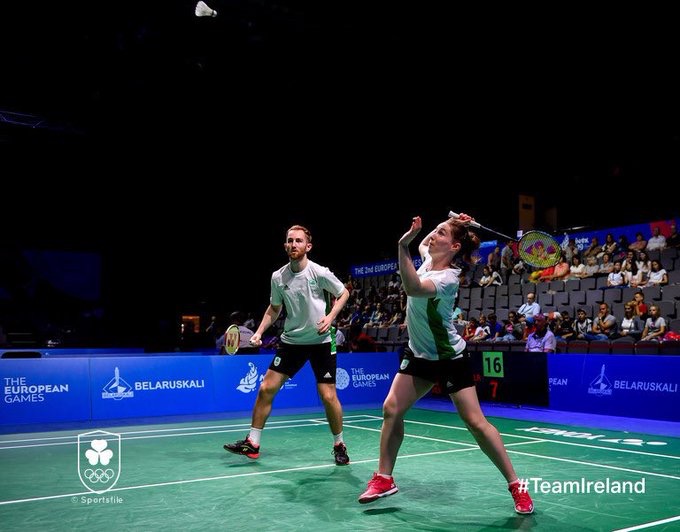 RAPHOE SIBLINGS Chloe and Sam Magee have secured at least bronze medals at the 2019 European Games.

By Chris McNulty in Minsk

The Magee siblings defeated Selina Piek and Robin Tabeling of Netherlands 21-19 21-17 in the mixed doubles quarter-final at the Falcon Club.

The Falcon Club resembles a falcon – a symbol of courage – with its wings spread and stands imposingly by the banks of the Svisloch river.

And the Magees had to show courage to take a tense first game 21-19.

The Donegal duo were five in front at one stage, but the Dutch pushed them all the way.

With first blood drawn, the Magees opened up a 5-2 lead in the second game.

By the skins of their teeth, they led as they headed back onto the court and took the first point on the resumption.

The Magees knew all about Piek, who had been one half of another Dutch partnership they defeated two years ago on their way to a bronze at the European Championships in Denmark.

And the Dutch inched in front 17-16 in game two, but the Magees got the bit between their teeth for a heroic finale.

Having won the final five points for a 21-17, their place upon the podium was safe.

The week got off to the perfect start for the Magees as they defeated Russian pair Evgenij Dremin and Evgenia Dimova 16-21 21-19 21-15 on Monday evening.

The following morning, they lost out to Thom Gicquel and Delphine Delrue of France, but the winning of the first game would prove vital in seeing them into the last eight.

After a comfortable win over Belarus‘s Aleksei Konakh and Kristina Silich, the Magees had to wait.

Their advancement was still up in the air, but France’s win over Russia meant they squeezed in.

Four years ago in Baku, the Magees reached the semi-finals before losing out to Gaetan Mittelheisser and Audrey Fontaine of France 21-12 23-21.