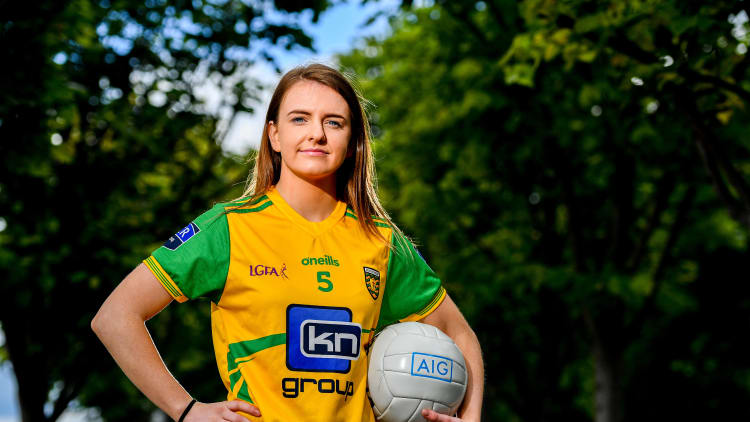 Donegal footballer Niamh Carr name-checked Karl Lacey and Yvonne Bonner as her sporting idols growing up – and she’s delighted to have had the chance to play alongside Bonner on the Donegal team.

“I always remember Karl Lacey. He was always an idol of mine, along with Yvonne Bonner growing up,” said Carr.

“She was a couple of years older than me. They were always players I looked up to.

“They were always happy to represent their county and were always excellent athletes. It was nice then to get the opportunity to play with Yvonne when we got up to senior level.”

Bonner took the chance to link up with the Greater Western Sydney Giants in the Women’s AFL for 2019 – and she hasn’t yet returned to the Donegal fold.

Her absence will be keenly felt when Donegal clash with Armagh in tomorrow’s TG4 Ulster Senior Final at St Tiernach’s Park in Clones (3.45pm, LIVE on LGFA Facebook: https://www.facebook.com/LadiesGaelicFootball/)

And Carr believes that Donegal are fortunate to be back in another provincial decider – and chasing three-in-a-row – after needing extra-time to get past Cavan in the semi-final.

“We’re lucky to get to the final I suppose. We had a very tough match against Cavan in the semi-final. We know that Armagh are going to be another step-up,” Carr said.

“We’re just preparing ourselves the best we can and we know it an extremely tough match – they’re a serious side, they’ve excellent forwards, a brilliant midfield and they’re a very strong running team so we know it will be a very tough match,” she said.

Maxi Curran is in charge of the Donegal team and he was also involved with Jim McGuinness’s Donegal men’s team from 2011-2013.

Carr paid tribute to her manager and stated that he brings professionalism to Ladies Football.

“Maxi is great and it’s great to have his expertise and experience. He was involved with us last year as well. He brings a real sense of professionalism to the game.

“He always has us well-drilled. He’s making us do the best that we can to better ourselves and to make sure we’re ready for the opposition,” Carr said.

Donegal lost out to Galway in the semi-finals of the Lidl National League, but Carr was pleased with her sides campaign, as their main goal was to stay in the top flight.

“I think we got a lot more out of the League campaign than we ever thought we would. At the start of the year our main aim was to stay up in Division 1.

“We had an excellent start to the League. We had a few very big wins so getting to a semi-final for us was excellent.

“We came up against a very good Galway team but we got close in the League, we got to try out different players.

“A lot of younger players got great experience so we were very happy with the League campaign. Obviously it didn’t end in silverware but we’re delighted with how it went,” she added.