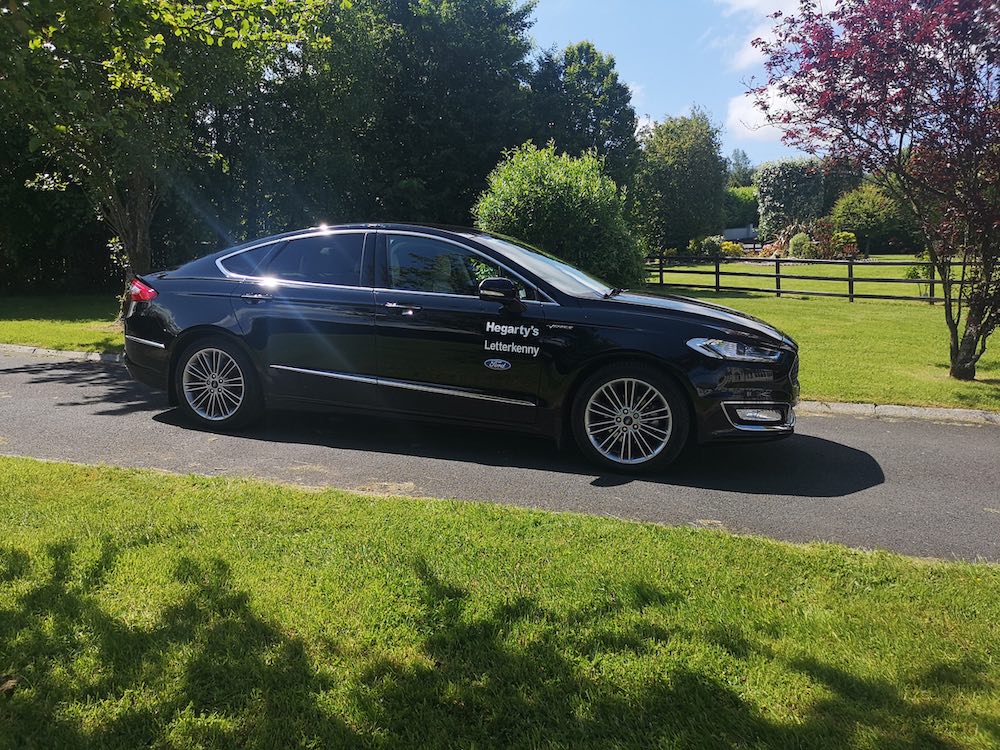 DD Motoring: First of the Hybrid Fords arrive in Donegal

You could be very mistaken for taking this very first hybrid Ford Mondeo for just any other top of the range Ford.

There is a hybrid badge on the boot lid but other than that you would never know.

Even when you go inside, this car has more of a luxury message to it than anything else.

It’s as if Ford is saying, “listen, we will do all the hybrid work under the bonnet and you can sit back and take the credit for making the decision for opting to go hybrid and do your part to reducing your carbon footprint.”

A view from behind the wheel of the new Ford Mondeo Hybrid. Photo Brian McDaid.

There were even times that I had to put down the window to see if I could hear if the engine was running because it was so quiet cruising along.

On the short time we had with this Ford Mondeo Hybrid, its economy was coming in at 47mpg which was mostly town driving which is where the batteries do most of the work in slow moving traffic, which by the way is an everyday event in Letterkenny!

It may be a case of the Late Late show for Ford to joint the hybrid race, but this car maker seems to have come up to speed with this first hybrid to be introduced to the Ford line up.

As with most of Ford cars now like the new Focus and the new commercials vehicles all are now known as ‘world cars’ and sitting inside this luxury model, it feels of flavours of America with its white leather in the top of the range model.

In North America, this car is called the Ford Fusion.

Our Hybrid came in the Vignale level which was created by Ford to help challenge premium manufacturers and is designed to deliver the ultimate in terms of luxury within the Ford range.

Vignale models are the luxury flagships in the Ford model lines, where they appear with a leather-lined cabin and a specification packed with the latest Ford technology

It only seems like yesterday that I mistakenly turned down an invite to test drive what I thought was a version of the Ford Fiesta called St. Moritz in Mondello Park in Dublin.

When Ford rang me to see why I wasn’t going to St. Tropez to test the very first Mondeo, I wasn’t long getting my bags packed to head down to the South of France for a test drive and short holiday of a lifetime.

Our motoring columnist Brian McDaid at the wheel of one of the left hand drive Ford Mondeo when they were first introduced at the press launch in the South of France back in 1993.

That was 26 years ago and there has been many changes and generations of the Ford Mondeo since, but the car still is one of the names that has been Ford for the longest time.

At the launch all them years ago, we were told that the name Mondeo came from the Latin for ‘world’. And ironically it was a 2,000cc petrol automatic Mondeo Ghia that I drove in France back then and this week it was also a 2000cc petrol powered automatic hybrid that I am testing a quarter of a century on.

Having a 1.5 Ford diesel that I drive a lot myself and know how easy the car on fuel is, the diesel version of the Mondeo will probably be up their as well in the fuel economy figures and here is where hybrids have a competition with conventional cars.

But the economy is not what its all about when you go out to buy a hybrid. Even if a diesel car will match a hybrid at the pumps, it will not last for long as the trends look likely to tax diesel more than petrol.

And in a way, this new Hybrid Mondeo is now doing its part for what it was called after in the first place, “Mundus” in Latin which translated into present-day English means“World”.

There’s not much to tell you about a hybrid of any type because everything it looked after for you.

You don’t have to worry about things like range anxiety or charging points our charging leads because this hybrid will recharge itself and will switch for petrol to electric when it’s most beneficial to do so.

Its all down to you now to do your part and make the move to hybrid or even all electric.

They reckon that in as little as 15 or 20 years time there will be more hybrids or all-electric cars on our roads than there will be cars with single powered engines in them so there’s no better time than the present to start thinking on the future in motoring than today.