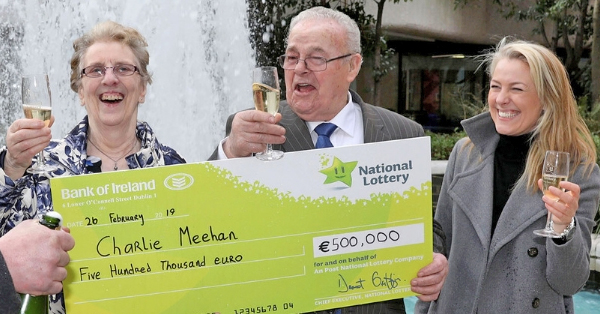 The list looked at new research on the number of top prize winners since the game was launched in 2004.

Ireland’s smallest county, Co. Louth, topped the table with the most EuroMillions winners per head of population.

Donegal winners have scooped €5,242,589 in EuroMillions prize wins so far, putting the county in the 17th spot in Ireland.

There were 19 top prize winners in Donegal since 2004. With a population of 159,192, that means there is one EuroMillions top prize winner for every 8,379 people in the county.

Notable local winners this year are Donegal pensioner Charlie Meehan, who won half a million in a EuroMillions Plus draw in February. Another man, who remained anonymous, picked up €500,000 in April after buying his lucky ticket in the Paper Stop in Glenties.

The luckiest county findings come as one lucky EuroMillions player in Ireland is guaranteed to win €1 million with this Friday’s (5th July) EuroMillions ‘Ireland Only Raffle’.

“Remember you don’t have to rush to Co. Louth to buy your EuroMillions ticket as chance has no memory and playing EuroMillions is purely a matter of luck, regardless of where you buy your ticket!”