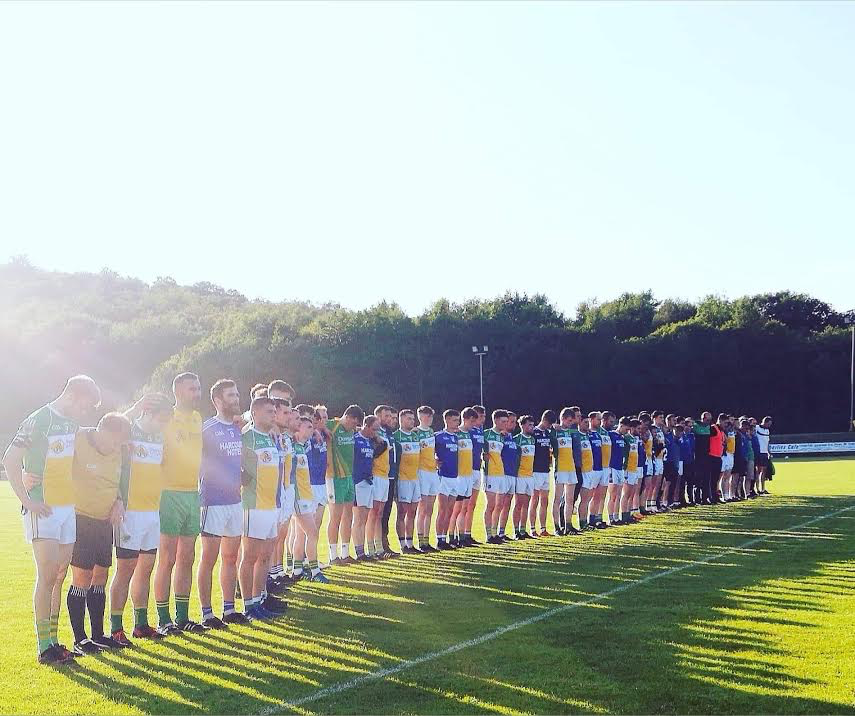 FOOTBALL MATTERS in a different way around Glenswilly at the moment.

The parish has been knotted in grief since the tragic passing of rallying star Manus Kelly, a club member, who was known through all strands of his community and county.

Only nine days have passed since his funeral and a wake that drew crowds in excess of 30,000 to the family home at Drumacanoo.

Football won’t remove the pain nor ease the awful sense of loss that hangs over them.

In the last few days, though, football has helped their grief. Their under-14s, captained by Mandy Kelly, Manus’s eldest son, won a Northern Board League title on Wednesday.

Here, they took another step in the process as the seniors returned to action on a night when the scoreline felt like a footnote.

Upon the banking, members of the Kelly family stood among the Glenswilly supporters as an impeccably-observed minutes silence, with the respective participants all linked in one poignant chain drew the night to a fittingly respectful beginning (pictured by Geraldine Diver).

Before the game, Naomh Conaill made a touching presentation to Donal and Jacquline Kelly, a €250 donation that will go towards Donegal Down Syndrome.

“He was always at games and was always in with a text before games,” the Donegal captain and Glenswilly player Michael Murphy said of Manus.

“The family has always been a big part of the club. Manus was just always there.

“He was just ‘Manus’ to us, but the sheer enormity of last week and the sheer outpouring, you realise that he was more than just ‘Manus’.

“It was difficult to see the sadness of all the characters in the area. They’re still down.”

Shorn a number of key players – not least the services of Murphy – Glenswilly were unable to mark the night with a win. For them, it wasn’t a night for depth of performance.

The game was resting on the edge of a blade when the evening swung decisively in Naomh Conaill’s favour in the 20th minute.

Eoin Waide made a goal-line block to deny Mark McAteer, who powered onto the end of a sweeping Glenswilly move that involved Shane McDevitt and Shaun Wogan. Waide intervened just when it seemed as if McAteer was about to steer to the net.

Naomh Conaill surged on the counter and McAteer was penalised for a foul on Brendan McDyer down the other end. It appeared a harsh call, but O’Malley stepped up to tuck home from the spot.

The early passages had been tit-for-tat, with a brilliant McDevitt free pulling Glenswilly within a point just before the opening goal.

McDevitt, who scored seven points for the hosts, kept Glenswilly in touch, but a second Naomh Conaill major put it beyond their reach.

Seamus Corcoran hoisted a hopeful ball goalward. As it fell from the sky, only McGuinness reacted. With Glenswilly static, McGuinness finished from close range.

Dermot Molloy and Anthony Thompson put seven between them, although Caoimhin Marley, after good work by the Kelly brothers, reduced the arrears.

Glenswilly looked at a 2-7 to 0-7 deficit at the changeover.

On the sideline were the likes of Murphy, Neil Gallagher, Ruairi Crawford, Aidan McDevitt, Gary McFadden and Kealan McFadden. Joe Gibbons was absent, too, while Ciaran Bonner and Caolan Kelly were withdrawn injured.

By contrast, Naomh Conaill were able to spring Donegal panellist Eoghan McGettigan from the bench and the sharp-shooter clipped four points.

Late in the game, AJ Gallagher prodded in a third Naomh Conaill goal to put a gloss on the scoreline.

A fine 15-point win for Naomh Conaill, who had nine different players on the scoreboard.

And an important night for Glenswilly for a whole variety of reasons beyond the perimeters of Pairc Naomh Columba.