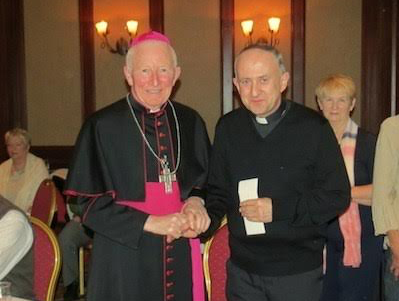 THERE IS deep sadness across Donegal following the death of Very Rev Joseph O’Donnell, Parish Priest of Ballintra, this morning.

Fr O’Donnell passed away in hospital following an illness.

Fr O’Donnell was appointed P.P. in Ballintra in June 2016 after two years as a Curate in Mountcharles.

Fr O’Donnell spent the bulk of his priesthood in Letterkenny, serving in the Cathedral parish for eight years and as a Curate in Aughaninshin for 16.

At a farewell function, as he bid adieu to the Church of the Irish Martyrs in 2014, hundreds turned out at the Mount Errigal Hotel.

A big sports fan, he was a keen supporter of Leeds United and was a founder member of the Downtown Bar-based supporters club in 1992.

A native of Main Street, St Johnston, Fr O’Donnell is predeceased by his parents, Hugh and Eileen, and is survived by brothers Seamus and Jude, and sister Elaine.