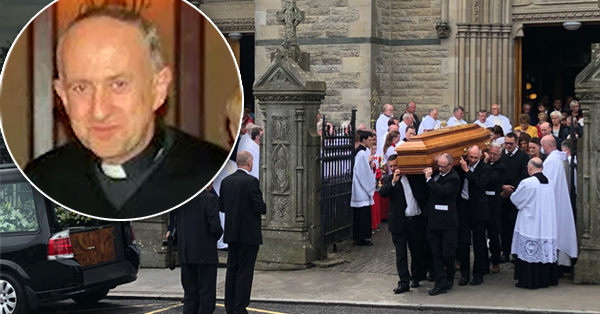 ‘Stories of his kindness are in the hearts of so many’: huge send off for Fr Joe

The popular priest (55), most recently the Parish Priest of Ballintra, passed away in the early hours of Sunday following a battle with an illness he bore with great dignity and faith.

“Stories of his kindness are in the hearts of so many people,” The Bishop of Raphoe, Alan McGuckian SJ, the Chief Concelebrant at this afternoon’s funeral mass at St Eunan’s Cathedral Letterkenny said.

“A woman said to me with great feeling on Monday: ‘Ah, Fr Joe, sure he was a wee dote’.

“Fr Joe would’ve hated to be described as a ‘wee dote’, but that comment summed him up. People ‘doted’ on him.”

Bishop Emeritus of Raphoe, Dr Philip Boyce and a vast number of priests from across the Raphoe Diocese and beyond, as well as parishioners from all corners of Donegal, where he had served, left the Cathedral close-to capacity.

Thirty-one years ago last week, Fr Joe’s hands were annointed with chrism before the same altar of St Eunan’s Cathedral by the then Bishop of Raphoe, Seamus Hegarty, at his ordination on July 3, 1988.

Among the many priests at this afternoon’s Requiem Mass was Rev Dr Niall Coll, a fellow St Johnston native ordained to the priesthood on the same day.

“When he was at St Eunan’s College as a student, he used to say that he escaped to St Johnston, where it rained less,” Bishop McGuckian said.

“Niall Coll remembers sitting on the bus to Letterkenny with Joe. When they got to Drumardagh and got the first glimpse of the Cathedral, Joe would say: ‘Ah, it’s raining again in Letterkenny.’

“What an irony, then, that he would spend so many happy years in Letterkenny and fell in love with the people and the place.”

He had been mentored by the then Parish Priest in St Johnston, Dr Cunnea, having been taken by a homecoming ceremony to honour the newly-ordained Fr Oliver Oliver McCrossan, just a couple of doors up in his native St Johnston some years previously.

“Children in those days used to play Mass and Joe was always the organiser,” Bishop McGuckian said.

Educated at St Baithin’s NS, Johnston and St Eunan’s College, Letterkenny, Fr Joe trained to become a priest at St Kieran’s College, Kilkenny from 1981-87 and later at All Hallows College, Drumcondra, Dublin from 1987-88

He was Curate in the Cathedral Parish from 1988-96 before moving to become Curate in Convoy, a position he held from 1996-98.

For 16 years, he served as Curate in the Aughaninshin Parish from 1998-2014, when hundreds turned out to a farewell function at the Mount Errigal Hotel in Letterkenny.

After a brief spell as Curate in Mountcharles, Fr Joe was Parish Priest of Drumholm (Ballintra) and Chaplain of Abbey Vocational School from 2016 until his passing on Sunday.

“The faithful from all of his parishes, his friends from all other faiths are gathered in great sadness to remember Fr Joe, someone who was very dear to all of us” Bishop McGuckian said.

‘Steely’ was among the words used by Bishop McGuckian to recall Fr Joe, who he said had been a ‘delicate child’ who suffered with asthma and diabetes.

Fr Joe also served as the Vocations Director of the Raphoe Diocese for many years and was also Diocesan Master of Ceremonies.

“When Joe did a job, he did it well,” Bishop McGuckian said.

“He could also relax and enjoy life. There are memories of holidays enjoying London and being a big child at Euro Disney.

“He enjoyed listening to Tom Petty, Queen and he followed Leeds United through thick and thin. He would have needed the concentration on good music to deal with the turmoil of being a Leeds United fan.

“For someone delicate, he was very sporty. He played tennis and set up a tennis court at the back of the family home. He played with his older brother, Seamus, and he was a very bad loser!”

A native of Main Street, St Johnston, Fr Joe was predeceased by his parents, Hugh and Eileen, and is survived by brothers Seamus and Jude, and sister Elaine

‘Stories of his kindness are in the hearts of so many’: huge send off for Fr Joe was last modified: July 12th, 2019 by Chris McNulty
Tags:
Bishop Alan McGuckian SJDR PHILIP BOYCEFr Joe o'DonnellFr Joseph O'Donnellletterkennyraphoe dioceseSt Johnston