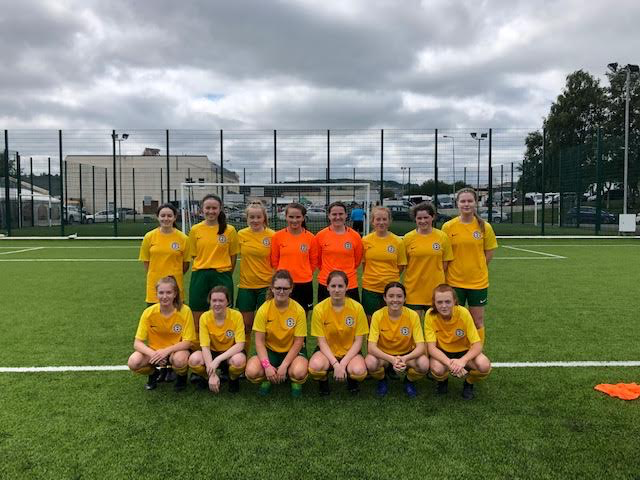 SHELBOURNE RAN in seven second-half goals to power away from the Donegal Women’s League and maintain their lead at the top of the Under-17 Women’s National League.

By Chris McNulty at the Letterkenny Community Centre

Rebecca Cook bagged four goals for the Reds, who had only led 1-0 following a competitive first half by Donegal.

It was a historic day with the first National League game played on the splendid new facility at the Letterkenny Community Centre.

Aoife Gallanagh netted in the second half for Donegal’s first goal of the 2019 season.

Zoe Leonard’s goal after only two minutes had Shels in front at half-time, but only just.

Shelbourne goalkeeper Courtney McGuire saved superbly to keep Holly Canning and Aoife Kelly at bay in the first half as Donegal gave a gutsy display that was possibly their best of the season.

Leonard broke the deadlock in the opening exchanges and Neve Scanlon, the home ‘keeper, kept Donegal in it with a fine save.

Tori McManus shot wide for Shels and Donegal might have been level, but McGuire saved brilliantly with her feet from Canning, who connected with a Ciara McGarvey corner.

McGuire, also with her feet, denied Kelly soon after as Donegal came close to a leveller.

By the time Donegal could find their feet in the second half, Cook riffled in a second and, after Emily Whelan struck a post, Cook slotted home a third.

It was rough justice on the Donegal girls – their cause not helped by an injury that forced Scanlon out of action – who were shellshocked when Cook steered home after Whelan sped down the right to create the opening.

Cook and Whelan made it 6-0 before Whelan volleyed to the net from an Ella Maree corner.

Gallanagh brought cheer for the hosts with a tidy finish and was only denied a second by a fine save by McGuire from a free-kick, but Jodie McQuillan added another for the Dubliners, who are sitting pretty at the summit.